So the orphanage thing was just a one time deal for me so far, but the idea is that one of the three teams in my district goes every week and we rotate, so I'll go again next week.

(video of Elder Whitlock and his companion playing Bang!
with orphans at the orphanage, complements of Sister Pihl) 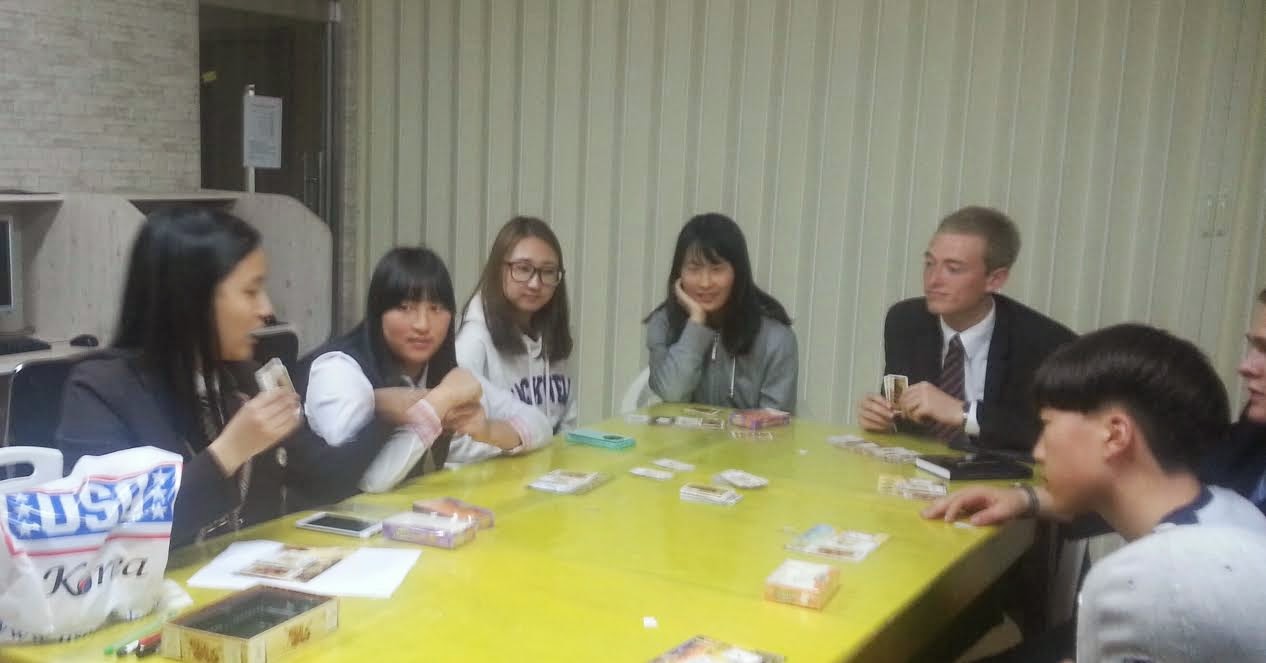 (Photo credit: Sister Pihl, who said, "Wonderful job!
So glad to have Elder Whitlock as part of our team.  The kids love him!")

The branch is English speaking. It's predominantly made up of military member families and single soldiers, although the area opened up for the first time a year ago and there are a small collection of converts coming as well.


(Sister Pihl sent this video, saying, "What a great night.
Thought you might enjoy watching a great teacher.") 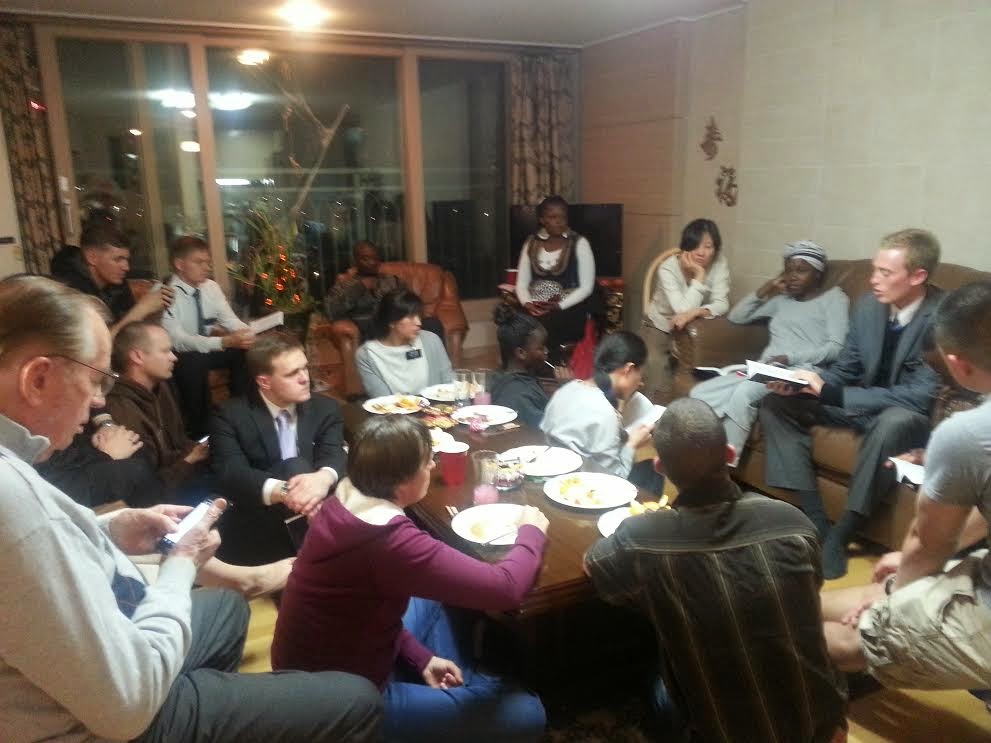 I actually gave a talk this week. Prepped it with 15 minutes in mind, but [the speaker before me] went long, so I just took two minutes at the end and nailed it. Public speaking is dramatically easier both in English and with Short and Sweet as the objective.

The Pihls are the Senior Missionary couple assigned to the branch. They are the ones that make it all tick. Great people and are like grandma and grandpa to everyone here. The best ever!

Investigators...honestly not a ton to report this week. They're all basically the same.

Birthday was good. We taught some people, ate some jajangmyun, which is a "Chinese" noodle dish with black sauce. The funnest thing was the DMZ trip the day before. ... I lucked out getting to serve in the same zone as [Elder S] for his last one. We talked a lot on the bus, and I talked a lot with Elder K as well. 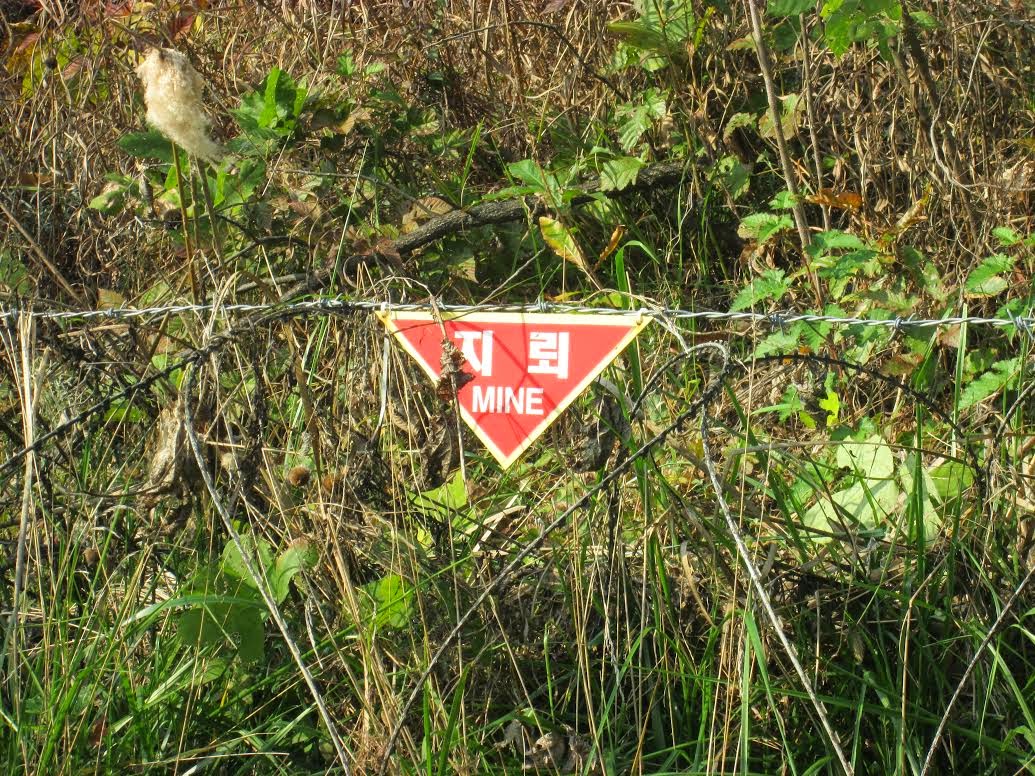 We kind of got the full DMZ experience. We ran through this tunnel that the North dug under the DMZ for a while. It was pretty low so I had to crouch down and run forward. Kind of felt like either some sort of spec ops guy or an ant. Maybe the highlight of the trip. Then we actually went to the DMZ. First to a viewing platform where we got a good look at everything. It doesn't look like you might picture it. I was expecting basically the no man’s land from WW1: a whole lot of dirt with barbed wire and land mines everywhere. Actually, it is super green. Trees everywhere, with a functional little highway that connects the two sides. And for being the Demilitarized Zone, there were a whole lot of soldiers around. 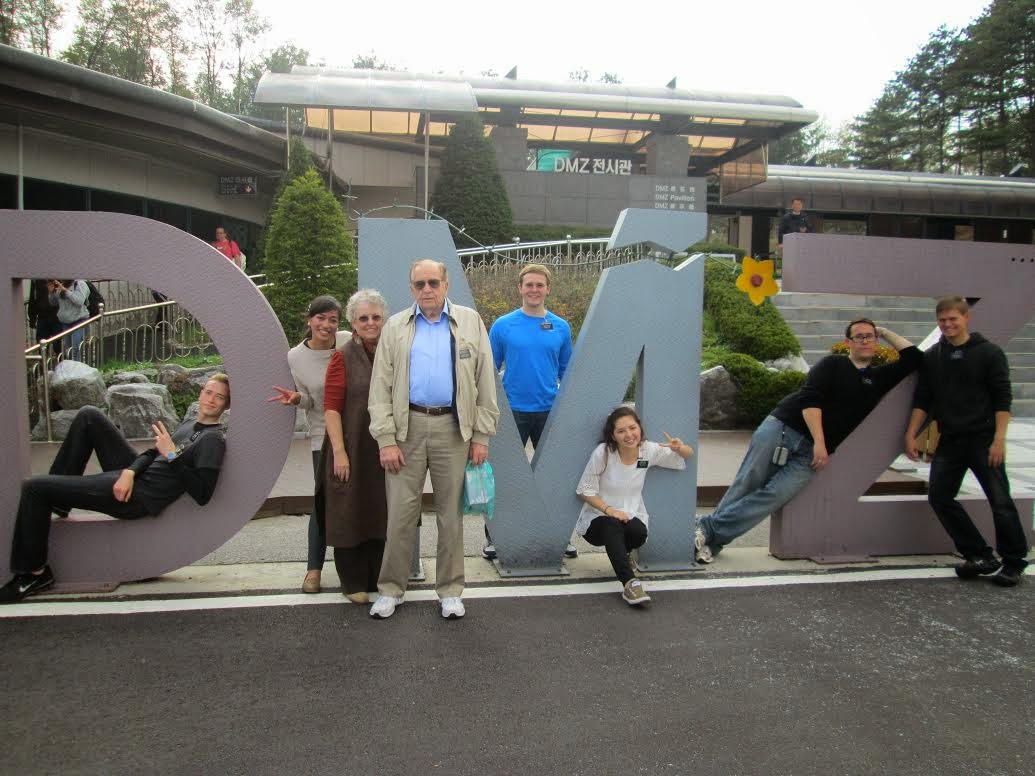 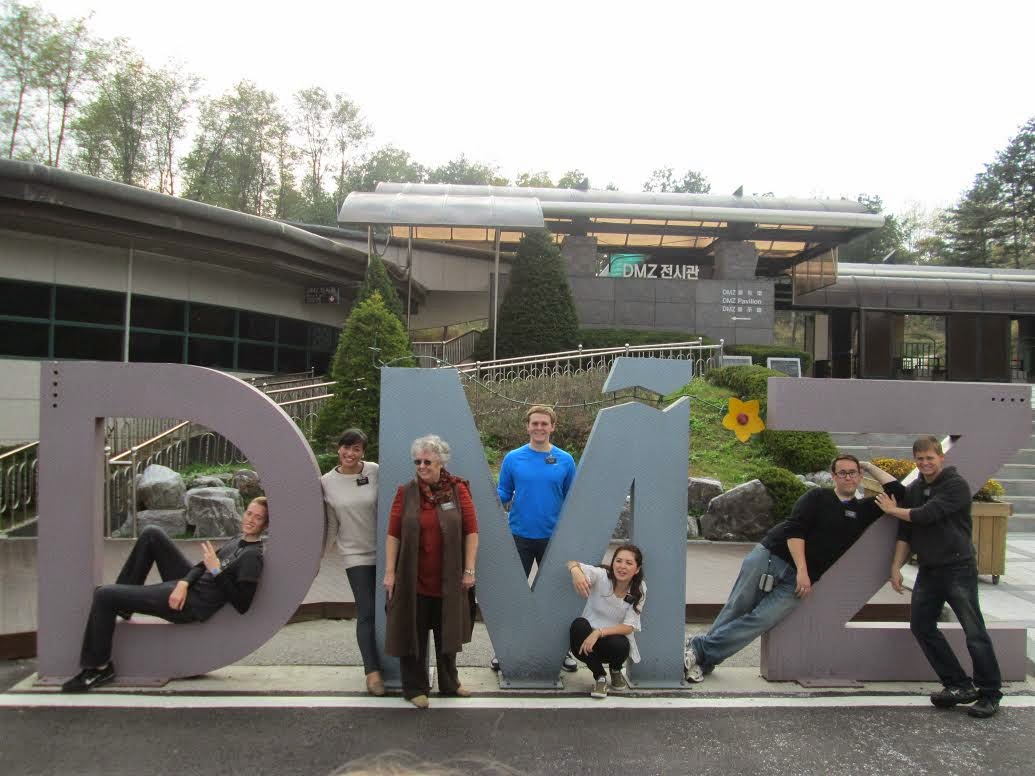 There are a couple of towns in the DMZ, one on the south side where people actually live and farm a good chunk of land (they actually make more money than the average South Korean by a fair bit) and everything is protected by US troops out in the fields constantly. There is also a North Korean town facade where no one actually lives, but there is a massive flagpole (one for both sides, actually) and a tower that used to loudly broadcast propaganda. 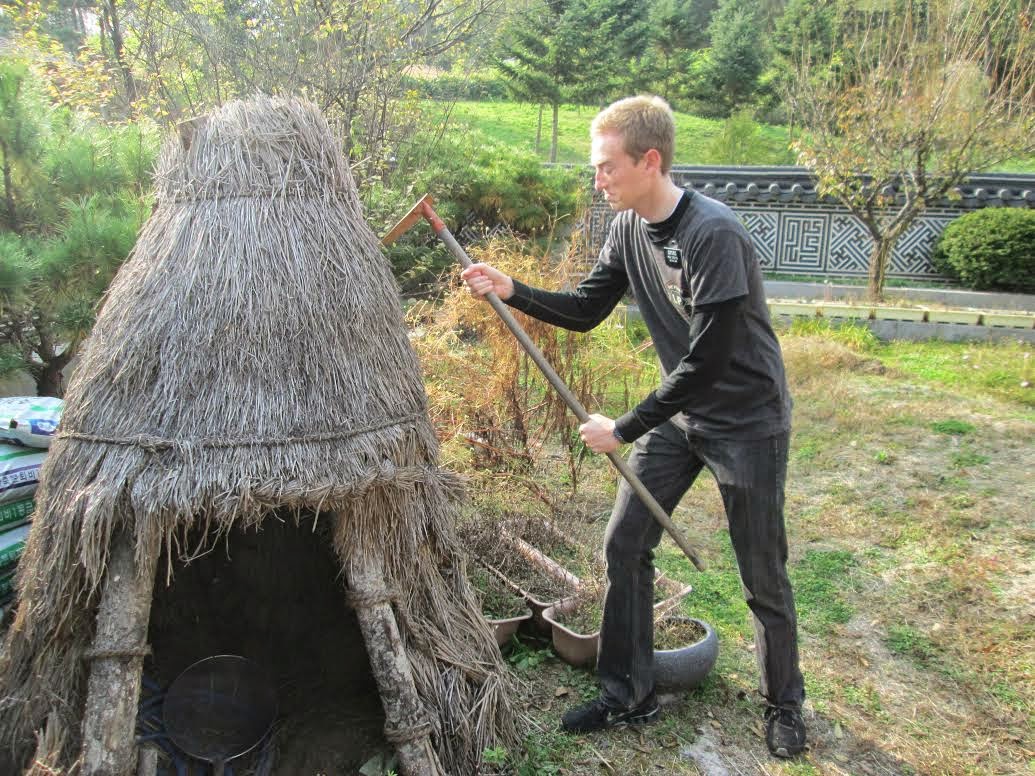 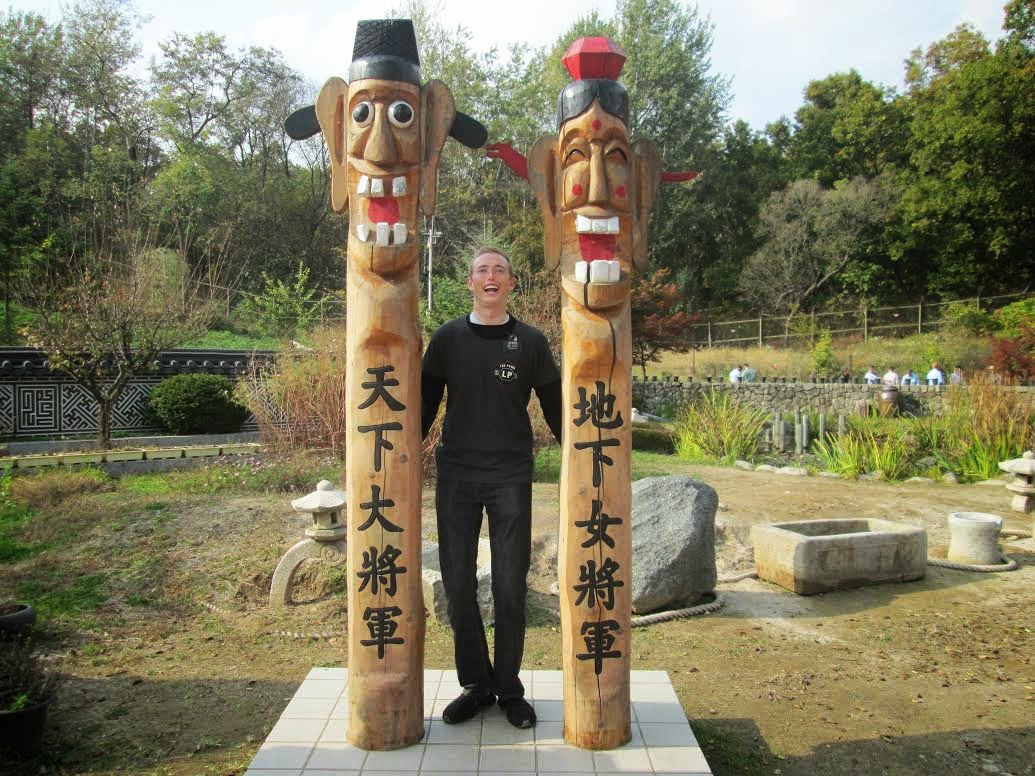 There is also a US base and, right on the line that divides the compound, a meeting room which is also split but is controlled by the ROK. They've got soldiers from the ROK constantly standing in intimidating poses towards the South and US, and ROK guys patroling around.

So we actually went to those places. I went into North Korea, technically. They also told us about a tree trimming incident that almost started a war and a firefight that broke out where I was standing over a defector from the North running cross the border.

It was basically the sweetest P-day ever. I'll send pictures later.

Still no camera, though I'm planning on buying one next week.

Great to hear from you, and love you all!

Don't have a lot of time and I've got a lot of emails (that Facebook email alert thing does a number on your email count).

Dongducheon is fun enough. I'm like a greenie again. No idea how to talk to Americans anymore. I've said, "Hi," in Korean, and asked them to shake my hand, and about a billion other really awkward little mistakes that show me that I've got some changing to do before I get back to the US. 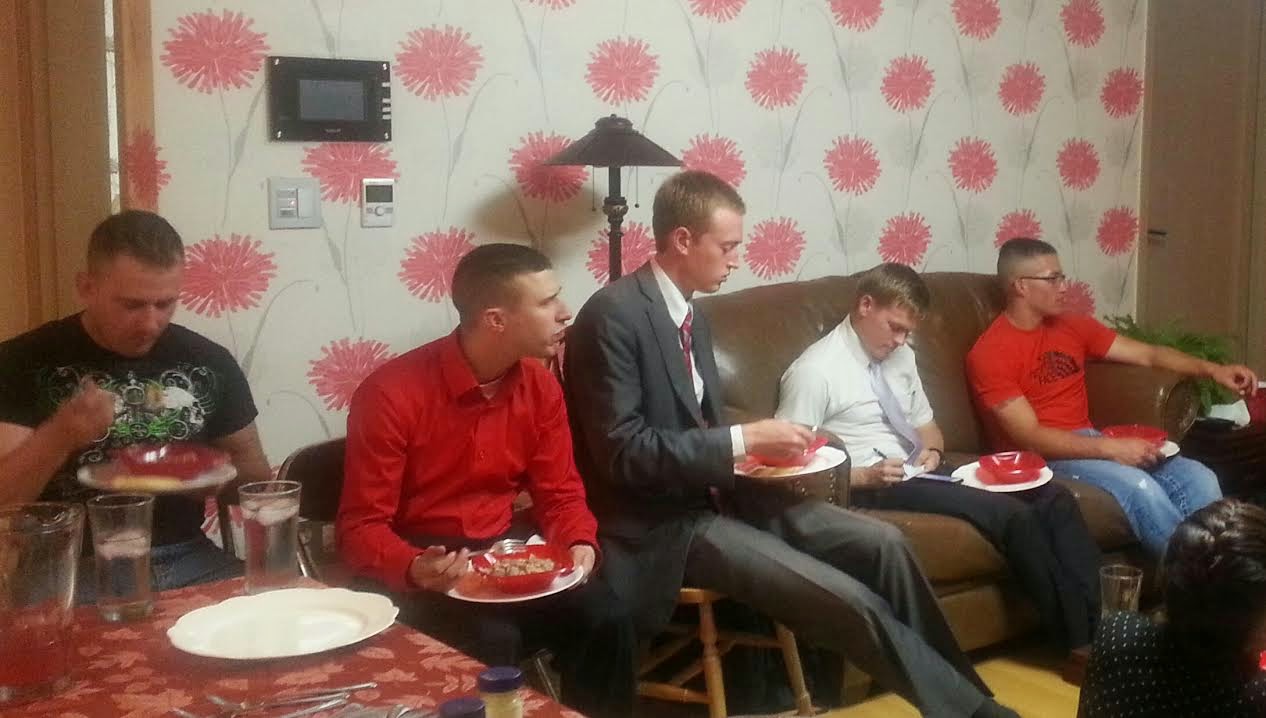 The area is about one third American soldiers stationed at Camp Casey, one third African (mostly Nigerian and Liberian) factory workers, and a third Koreans. The Koreans have been largely ignored by the other missionaries in the area because they have been fairly given up on and also don't speak English and so have to be sent to a different city if they want to attend church. Most of my success so far is with the Koreans because that's who I'm good at talking to. The Africans are as interesting as their names. They are all super into the Bible and are super quick to offer to meet with the missionaries. They really like us, but they have some tough work schedules and a tougher time keeping commitments. The area was split just before I got here and the soldiers from the pool went with Elder B___, who is a medic with the National Guard and served in Iraq. We got the Africans. There weren't really any Korean investigators. We are working on diversifying a bit more right now. Interesting area, but I need a few more weeks to get used to things and figure out how to do missionary work here.

New companion is cool too. Elder Ch____ is from Idaho and wants to go into real estate development. Went to BYU for a while. We get along well. 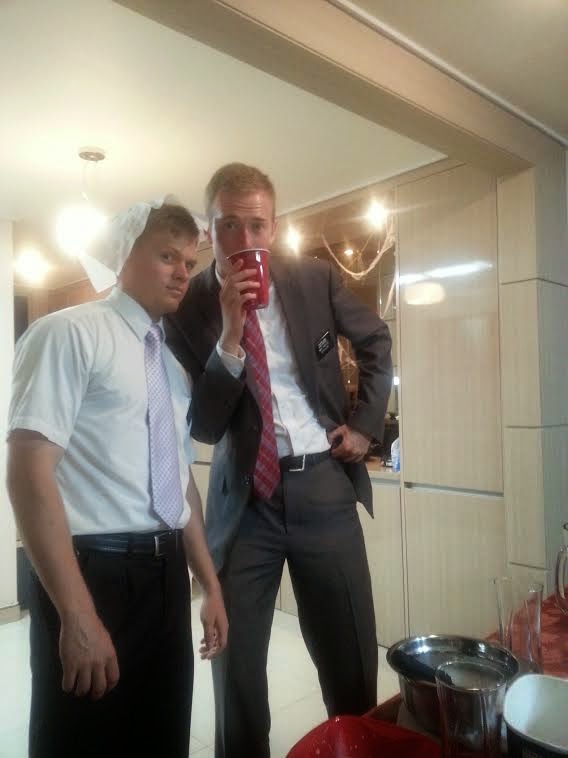 Anyways, no Outback here that I know of, but I'm eating an American diet again (chili, tacos, cereal, omelets...heaven) and we're going on a big zone trip to the DMZ the day before my birthday, so that will probably be my celebration. I get to see Elder S____ and K____ again, which I'm excited about.

Love you all, and thanks for all the birthday wishes!
Elder Whitlock
at 10:00 PM 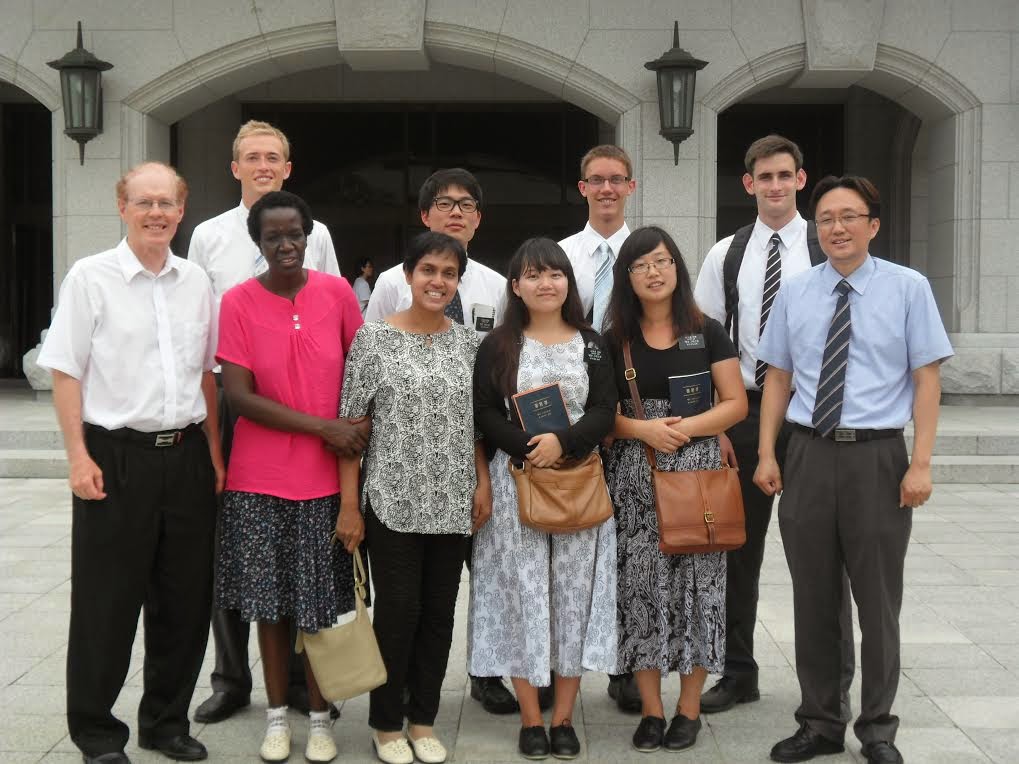 [What’s made a difference in the missionary work?] I don't know. A combination of things I guess. Getting better at Korean, jundoing to catch the right kind of people, being myself, but still changing the jundo every time, Elder Boyack...the tricky thing about missionary work is that there are way too many factors going to be able to experiment and see clear results. Makes it tricky to find what works and what doesn't. 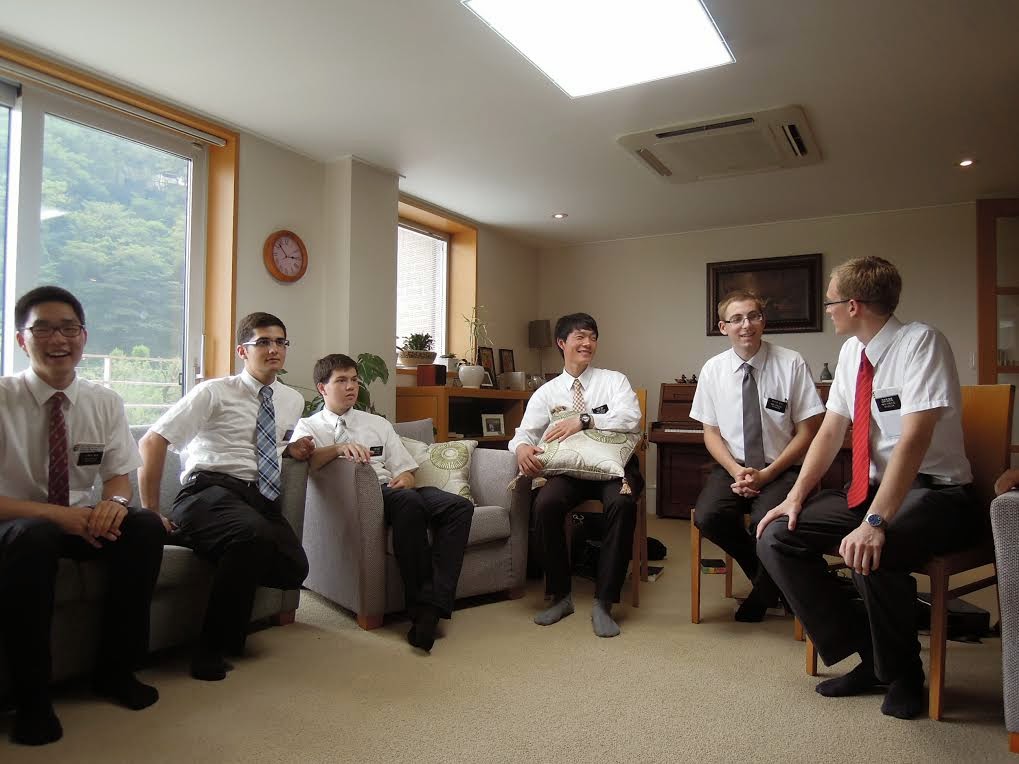 This week it was tricky to meet people because we had a holiday and General Conference. Not too much to report. One guy read the first 15 pages of the  Book of Mormon  and had actual, real questions about it.  [The Chinese couple is] planning on going for [temple] baptisms soon and, of course, getting sealed and what not once their year is up.

Conference was good! Wanted to cry when Elder Holland was speaking.... I'm now on the hunt for a huggable hobo. 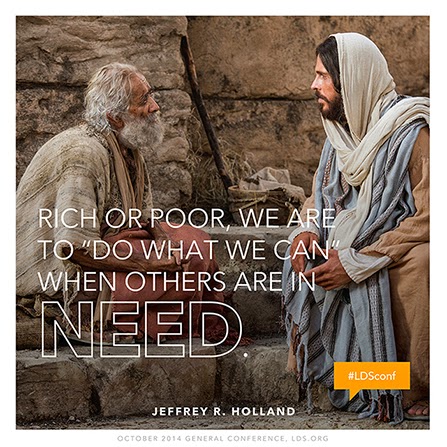 Things got a little interesting with transfers though.  I'll head into Seoul tomorrow night and then to Dongducheon the next morning. Dongducheon is an English branch at a huge US military base. It's all I could have wanted from an area, but I'm not going to be  in any sort of missionary leadership there. Upon learning of my transfer Sister Seo exclaimed, "Have they cast you aside already, Elder Whitlock?" which seems like a fairly valid question.... 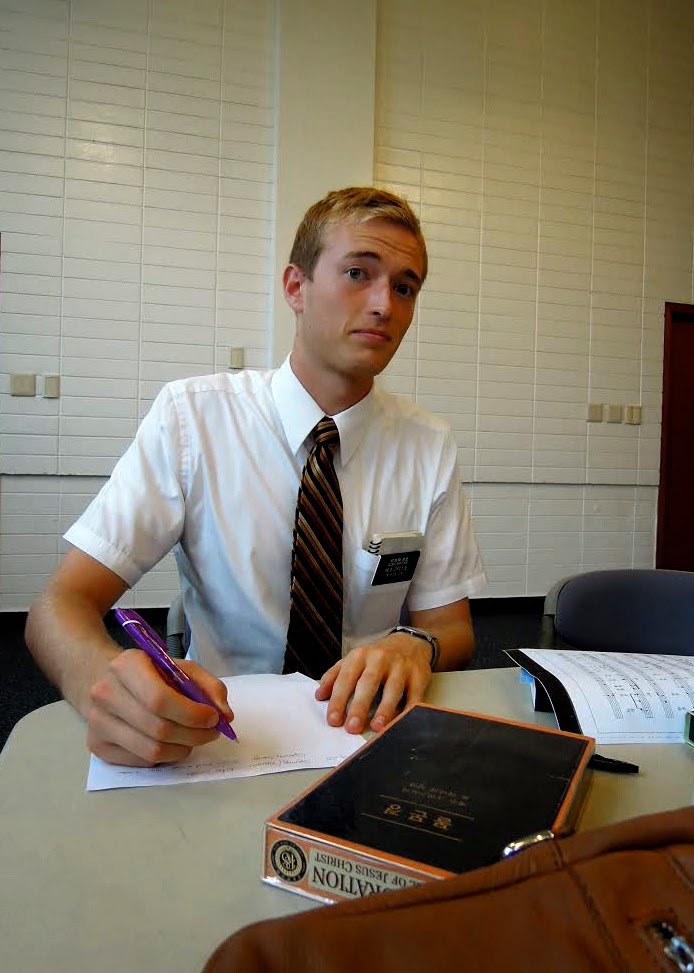 It's kind of frustrating how old I feel as a missionary but how young I am compared to all of my friends. They'll already be gone having lives when I get back there.

Anyway, glad Dad is back in public and that you had such a great week!

They got baptized! The service went through, President and Elder J made it out, and it was all great! My participation: Talk on Enduring to the End (parabled the Jaredites and barges story from Ether 6. Entering water = baptism, shiny rocks = holy ghost, the journey = ETTE + expounding, focused on how even though the journey literally had it's ups and downs, the result of the Jaredites sticking it out was verse 12:

Actually some of my better work), baptized, confirmed, and gave the Priesthood to Brother ______, and confirmed Sister _____. Also bought Outback (200$, cleared out most, but not all of my MSF money). 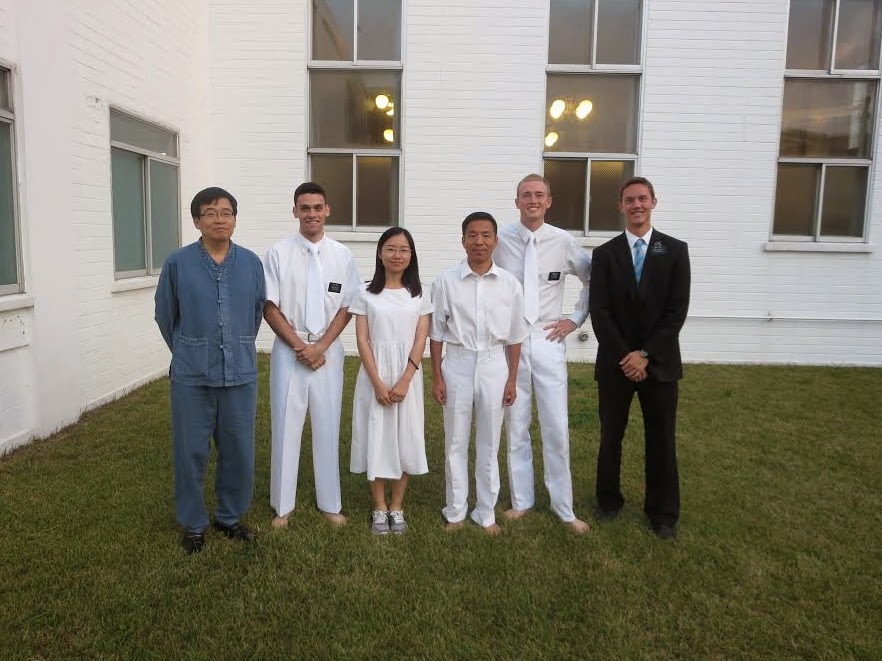 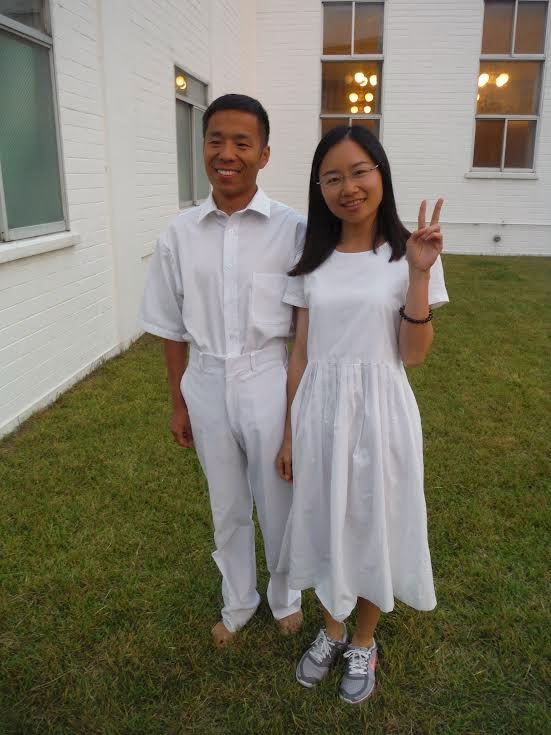 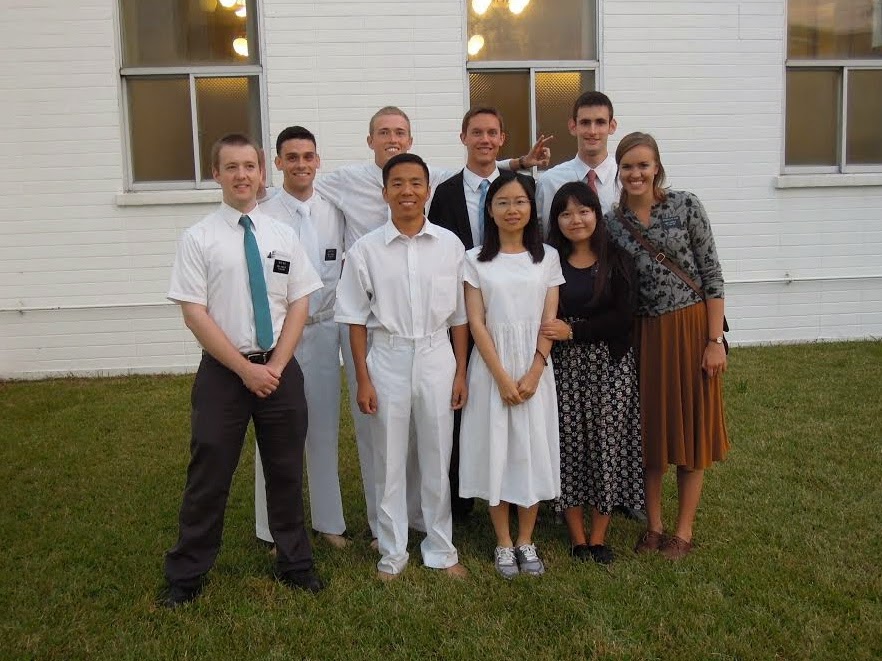 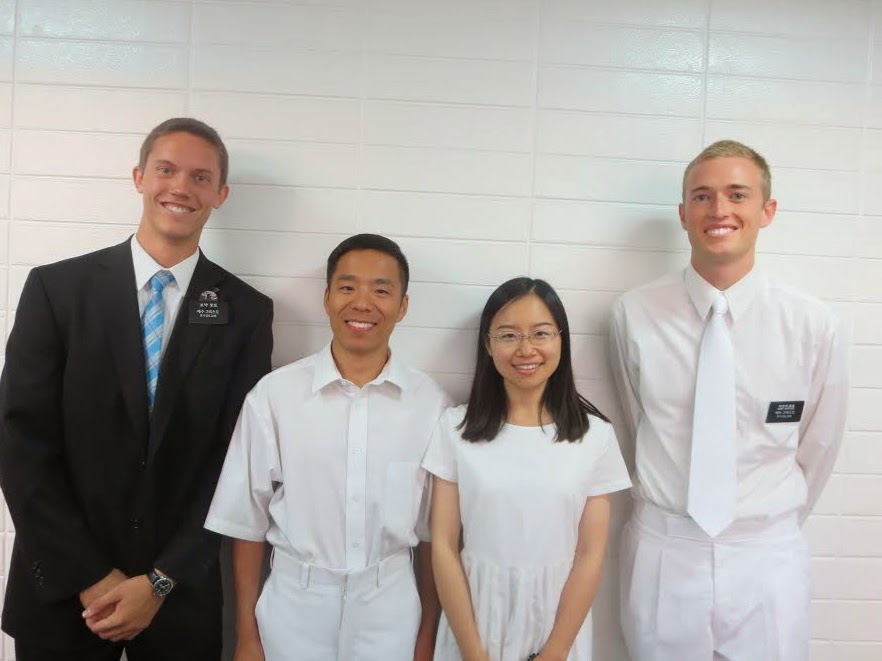 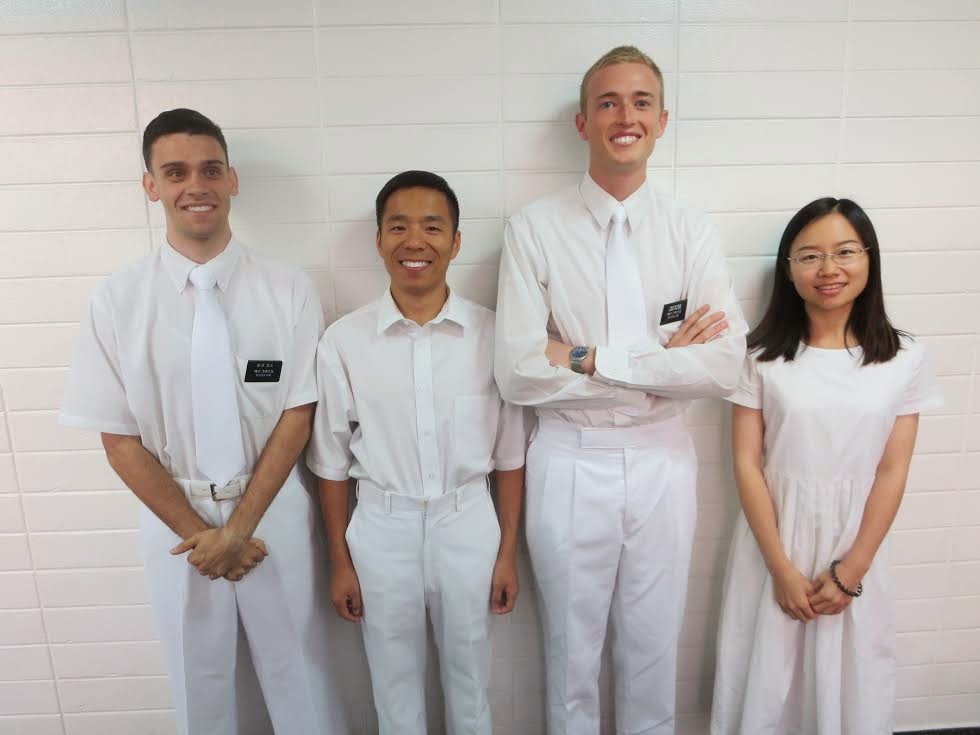 They speak Mandarin plus a local language a piece.  Also, I forgot to answer this for Dad, but they are originally from... I'm not great with Chinese names. He's from the central part of China and She's from the South Eastern part, but they met in Shanghai, which is where they lived as a couple during school. 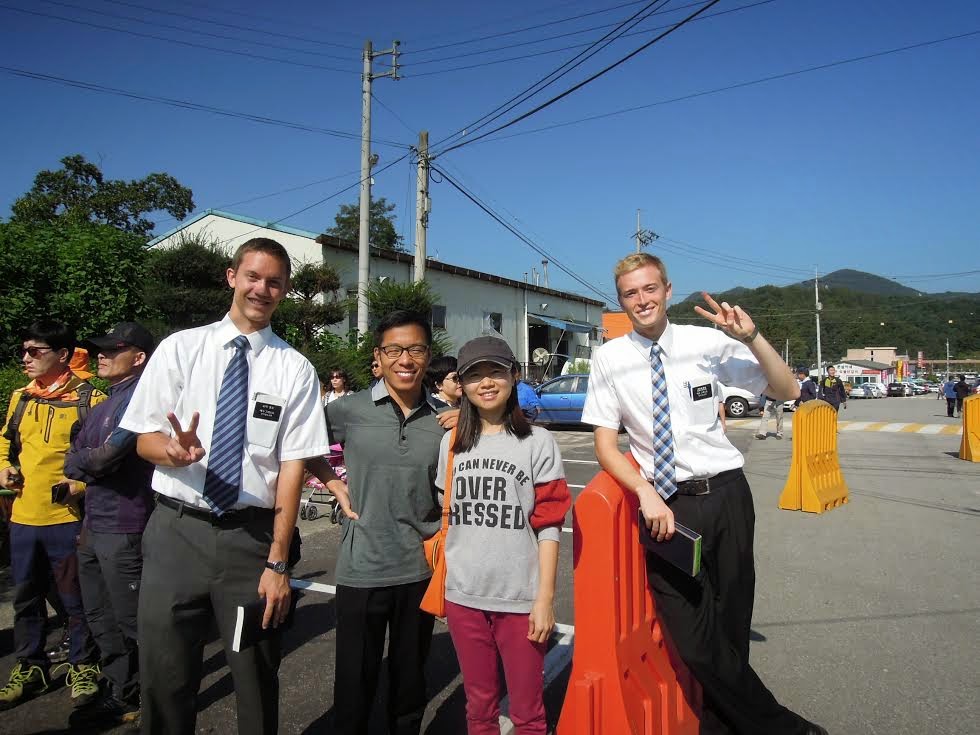 They loved the gift and note by the way. Said to say thanks.

Oh wait, I just checked my account and Outback only billed me about $18. There must have been some sort of bug, but now I'm still rich! Baptism miracle!!!
o( ^o^)o 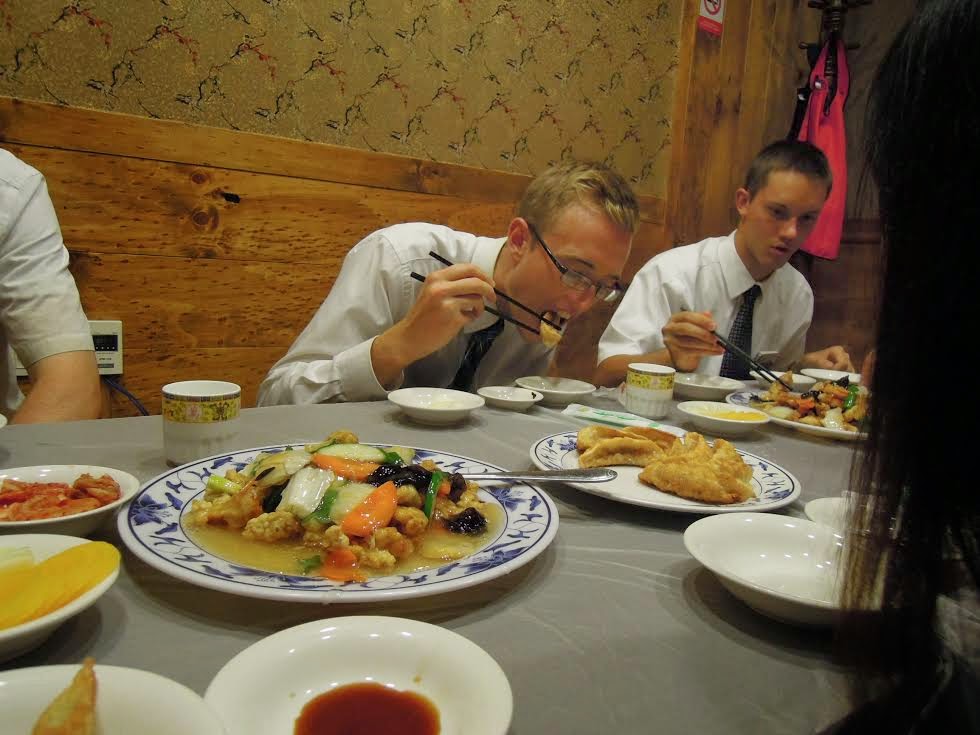 I eat good, but I eat smart. Try to stick to the house where I can, lots of spaghetti (Ramen was killing me), that sort of thing. Lately though my spending has gone up because we are teaching so much (We have like 14 actual investigators now and 5 of them are progressing, not including the Chinese couple. It's great!) that we rarely have time to make it back to the house. 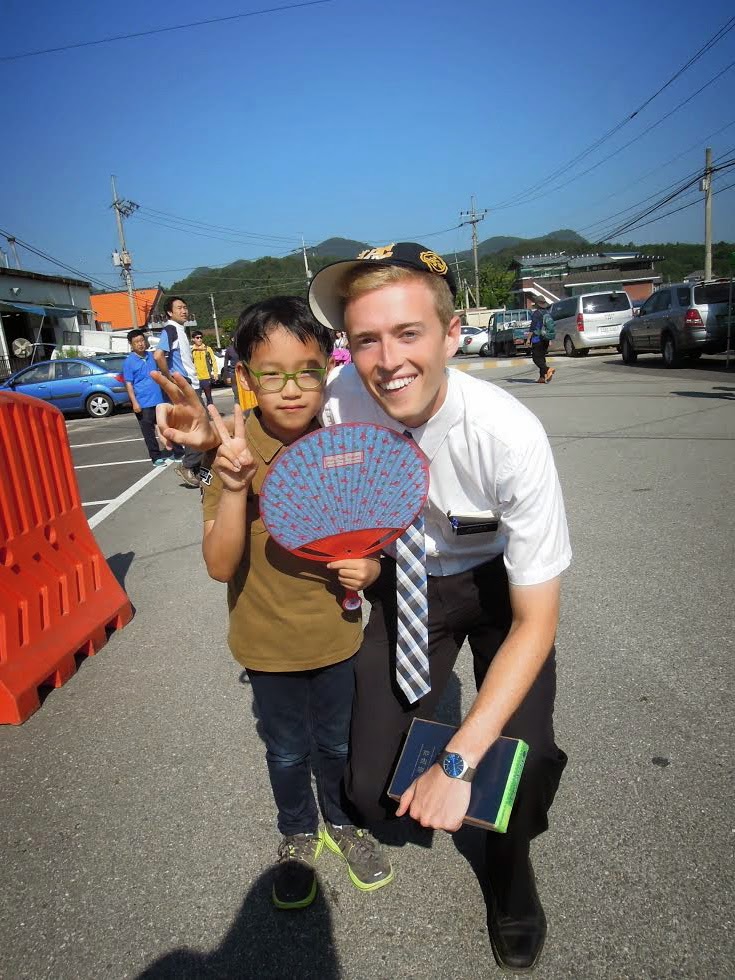 I don't tell you this to brag, but just to give you something to celebrate, but we're consistantly leading the Zone in stats every week. Such a nice change of pace from jundo every day! Feels like actual missionary work. 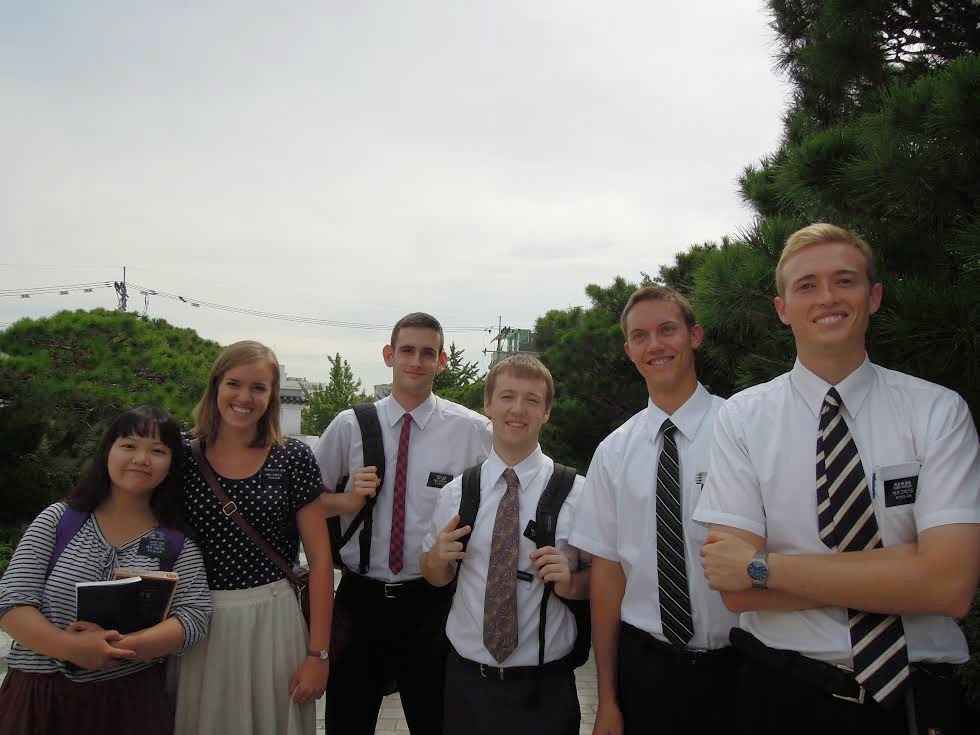 Yeah, don't stress the package thing. I love getting packages, but there is a rather sizeable chunk of me that smarts almost as bad as your face when I see the price tag on the postage.

Love you tons, and make Tyler's birthday the best for me.