I forgot to answer this question, but we had two transfers. Elder K (Elder S's companion and one of my good friends) got moved into the office and was replaced by Elder B who I also really like. Funny guy, has a way with words, enjoys Korra, that kind of thing. Also Sister L moved to Jangwi (the gotham of the mission, right next to and in the same Zone as Gireum) and was replaced by Sister M, an art major from Provo. 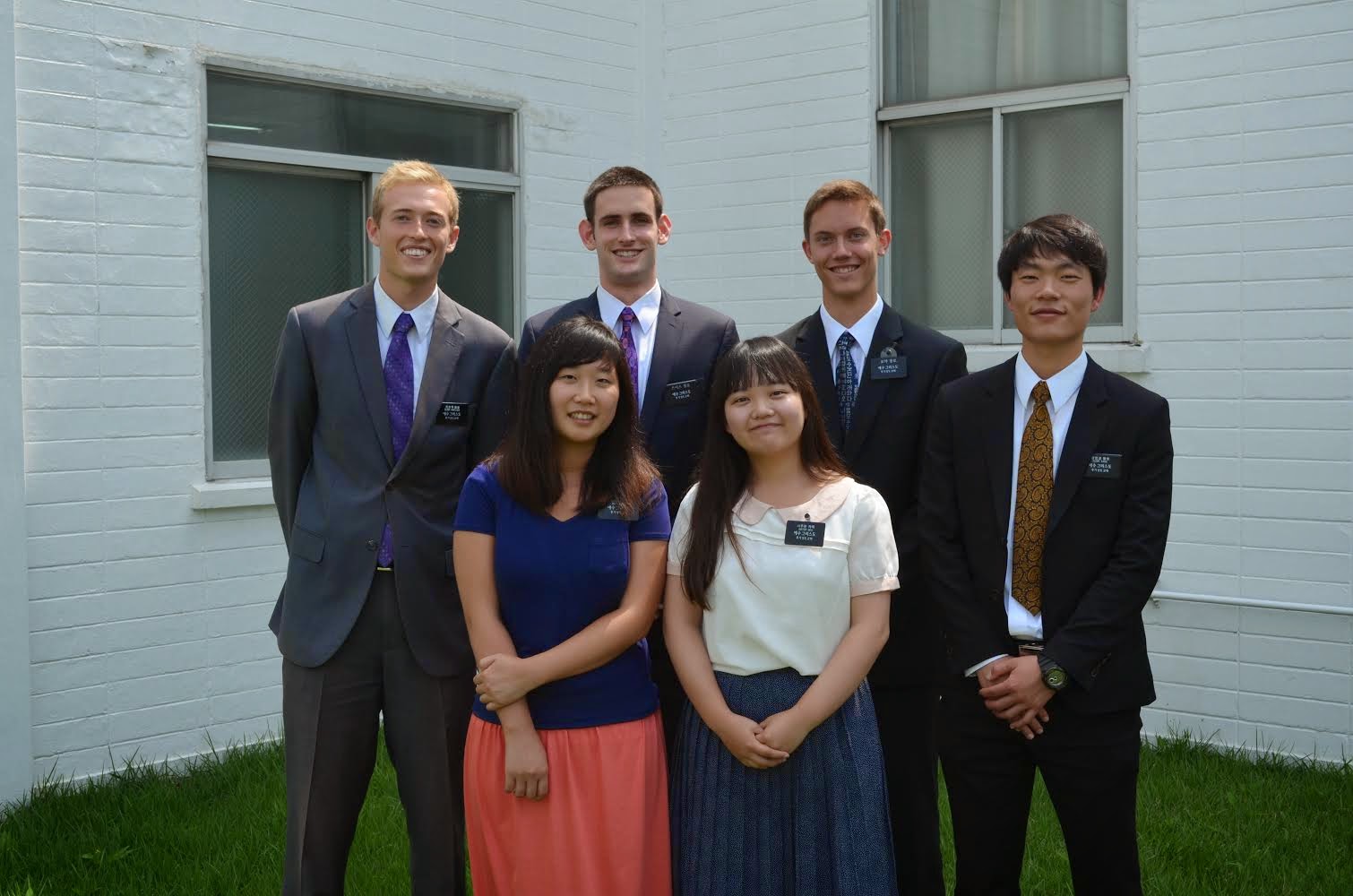 Last week we went on a hike on Monday with our ward mission leader....The next day was temple day, so I did that and then grabbed some "On the Border" Mexican food. I think the premise is "Outback from Tijuana," but it wasn't as good. I had been craving some Mexican food, but 40$ later it didn't measure up to either Outback or Cafe Rio. Right after we skipped P-day, viewing Monday as our play time, and came home to jundo.

It was a good missionary work week. Picked up a couple new people, one of which is Chinese and might have some potential. Besides the Chinese investigators, we have one other investigator on date and we got to see him again on Saturday night. We agreed to meet at 7, came, waited, called, texted, waited, and then left to jundo again, but at 7:50 I get this text in English that says "yes sorry," and then another that says "fastly willgo" so we return and meet him at 8:15 or so. Good lesson, he reminds me a lot of Brevin. He commited to come to church the next day, but said that waking up could be hard, so we were supposed to give him a wake up call. Sunday morning at 9:00 I give him like 4 calls and he doesn't take any of them. Misses church. Turns out his phone battery died in the night, which I only believe because of how ridiculous Saturday night was.

Most valuable thing I learned from the Koreans...I've learned a lot by viewing both the weak and strong points of Korean society. The biggest thing though might be the importance of Family. Most of my life I've been surrounded by pretty good examples of pretty good families, but out here...a lot of families are torn apart by society. They are hardworking, but they work too hard. So hard that there isn't enough time for the things that matter most.

I'm going through the Pauline Epistles with the study guide lately. Fun stuff. The guide was written back in the seventies, so there are all kinds of references to the evils of communism and nuclear war and whatnot. But most of the time I end up training my district using the Old Testament. More stories that they aren't in, which gives me some room to find applications they haven't thought of before. Like this week will be something about finding pressure balances in teaching using the Esther story.

Today should be fun. We are going for a bike ride along the river.

Love you all and hope you have a great week! 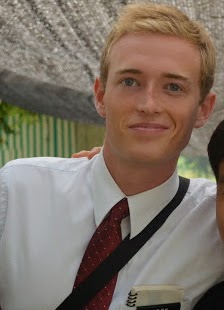 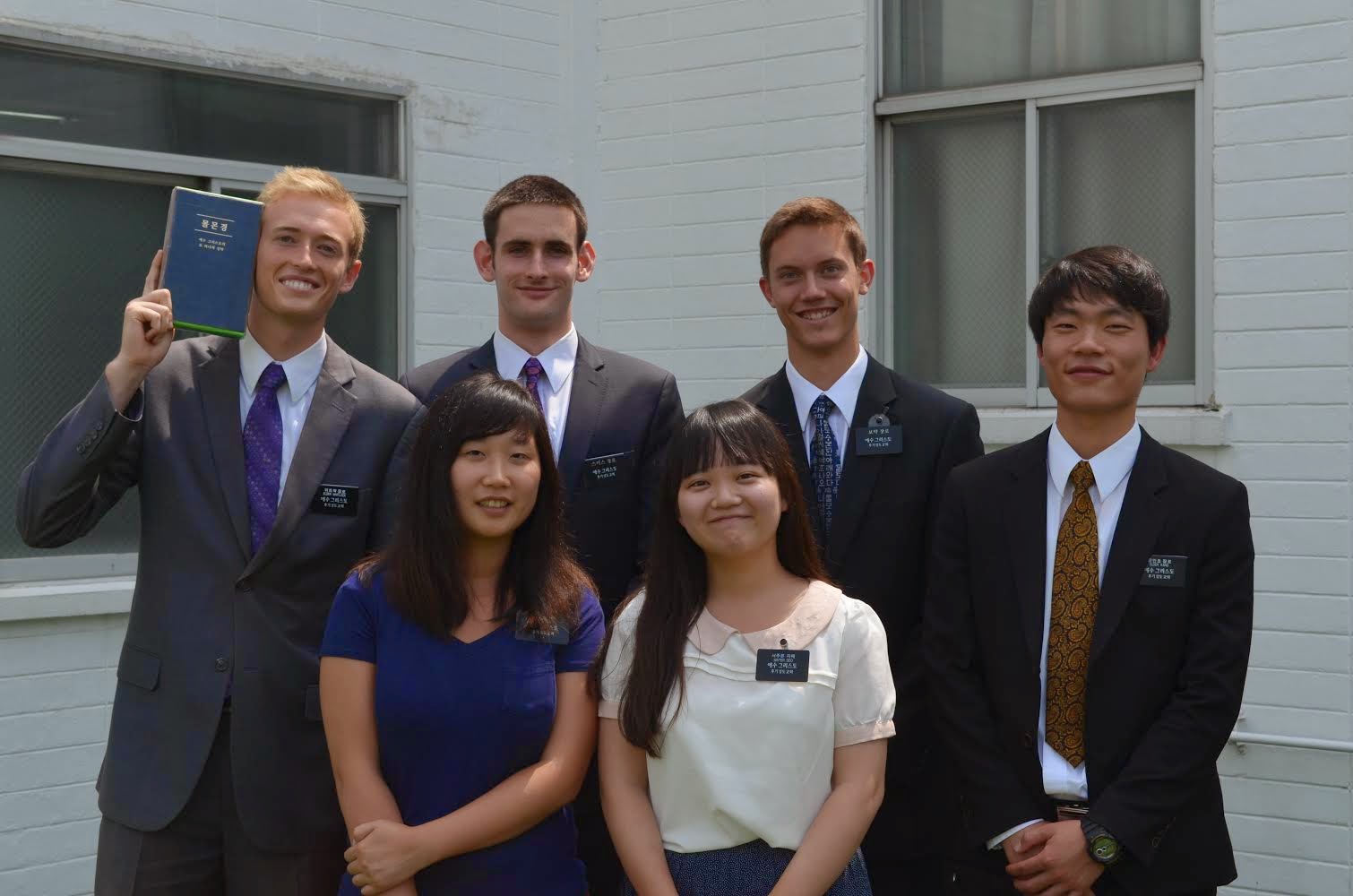 Here, But Not for Long 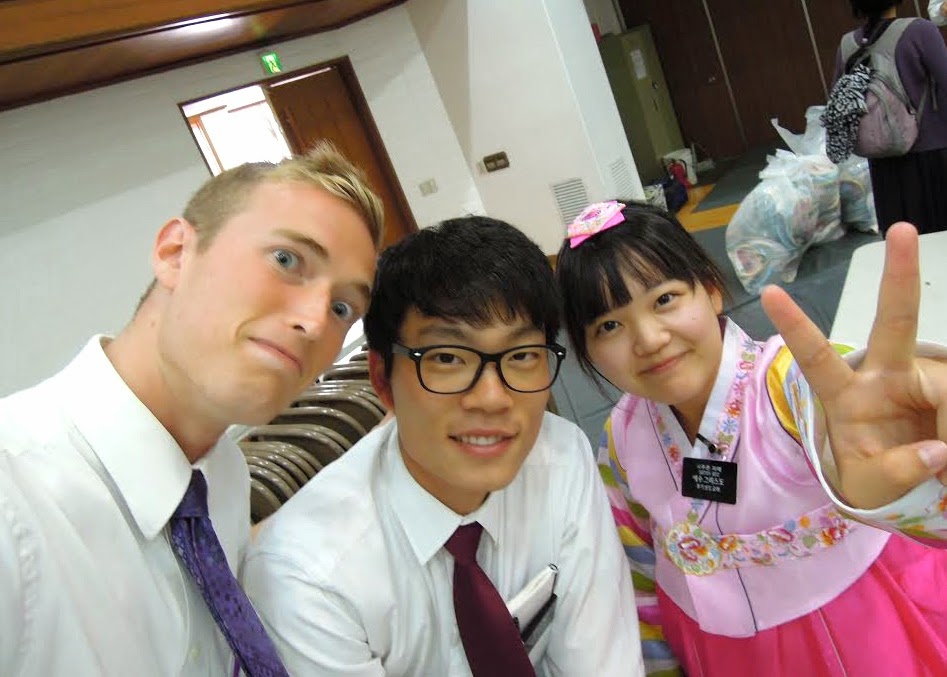 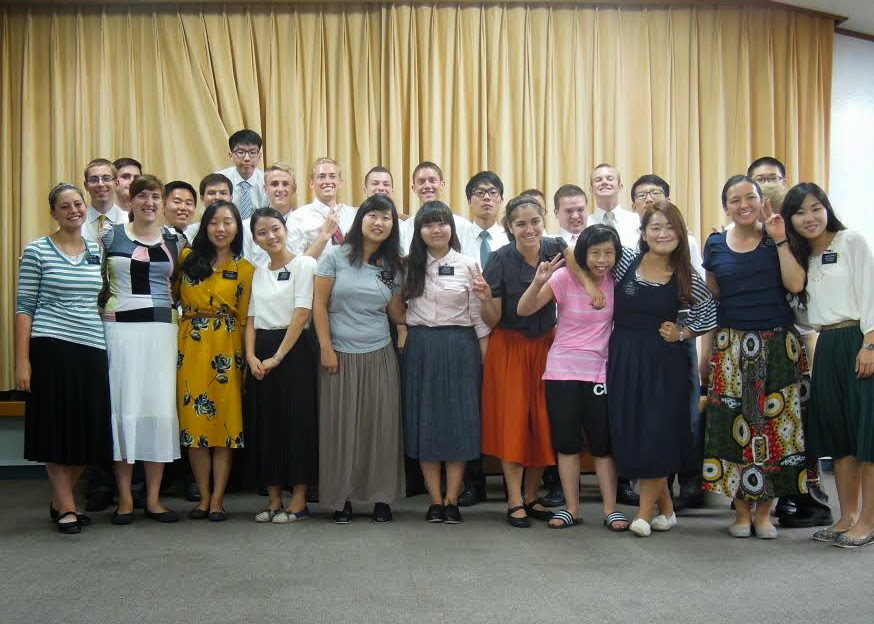 [To celebrate Chuseok, we] had a big conference and a zone training meeting and a district leader council.  The district isn't doing as hot as I would like, but we're still the top scorer in the zone (because the stats mean everything, right?).  _______ says he wants to be baptized in December, but we all know what that means. Chinese investigators are good. ... not baptized and still covenantless, but otherwise alright. We got another guy named _______ on date for October 18th.

When we set up appointments with people and they don't come we say that "they punked us" or "we got punked". So, my district was completely unaware that transfers were the day they were and we didn't go. So [last week] we punked transfers. In [my area] there is sort of a five transfer rule, or so it would seem. This is my fifth, so I think I'm out after this last transfer.

Korean...I'm pretty comfortable. I can say what I want to say and understand most everything that pertains to missionary work. There's more to learn, but I've got what I need.

Sorry to disappoint, but we went on a one hour hike (not looking super fally yet, but I did spot some leaves falling on the hike today) with a member that turned into a six hour hike. 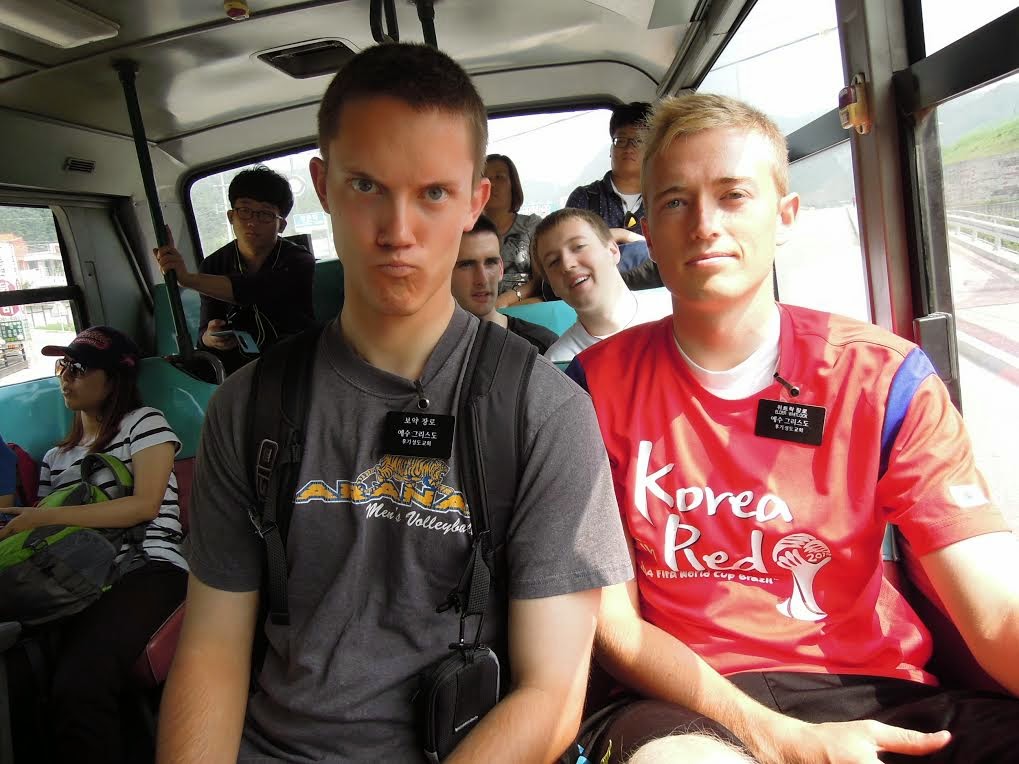 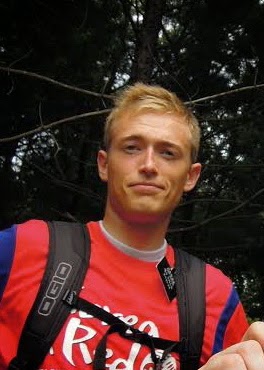 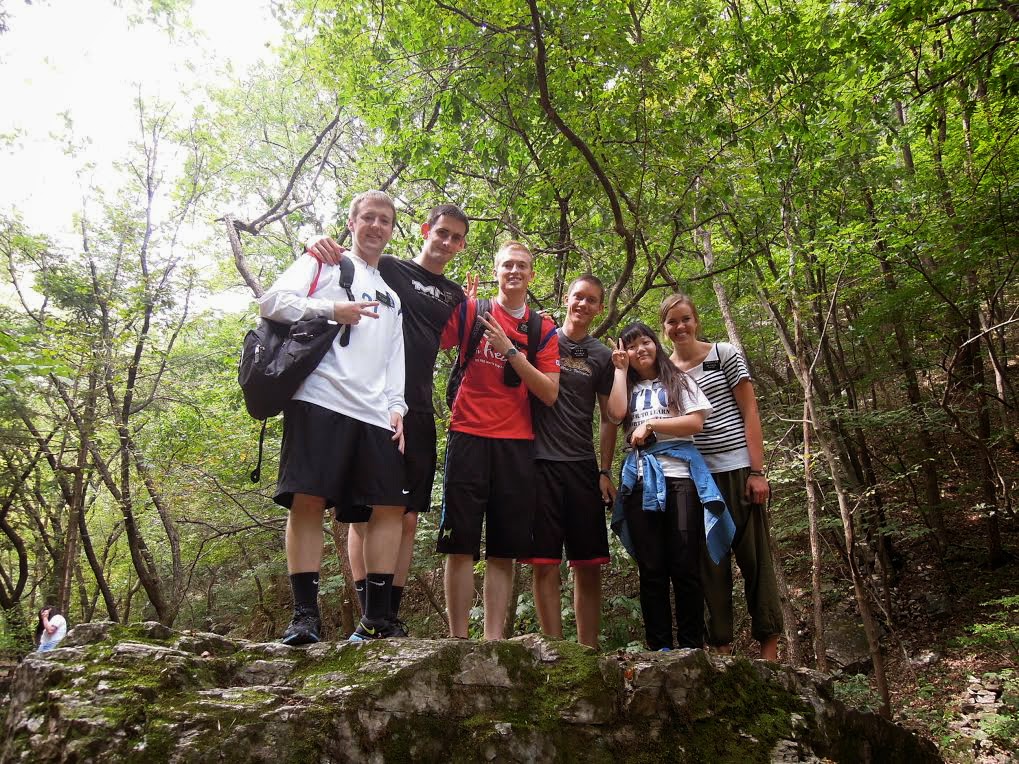 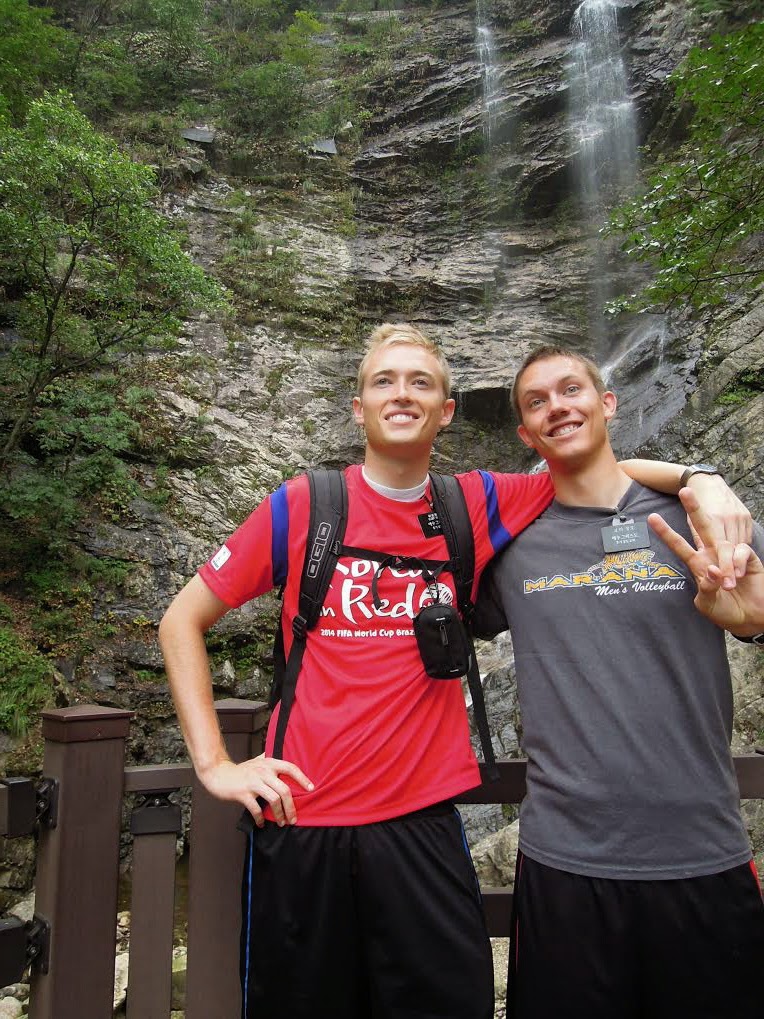 .... So. I'm here, but have to catch a train in an hour, so I won't be here for long.  We've actually been in and out of Seoul for basically the last week straight and are heading back tonight for temple day.   Then I'm going in again to pick up my companion from an exchange with the ZLs this Thursday.

I'm starting to look down in the most prideful and hypocritical way on ambition.

By the way, check out what I got in the greatest birthday box ever! 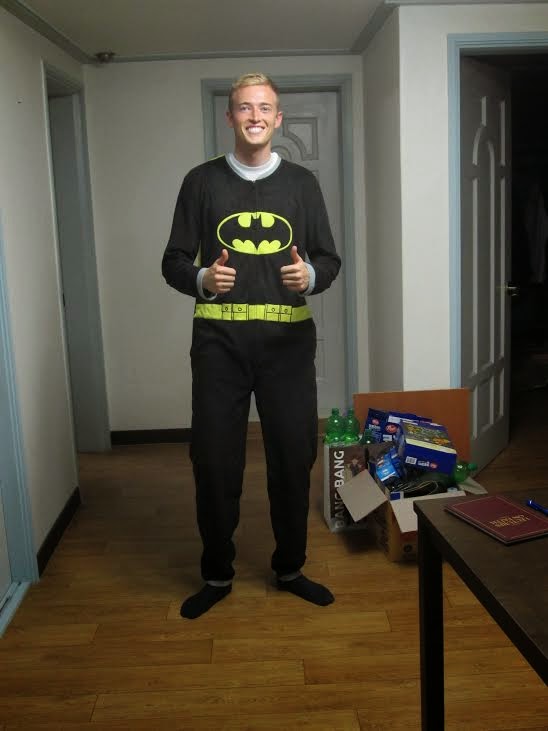 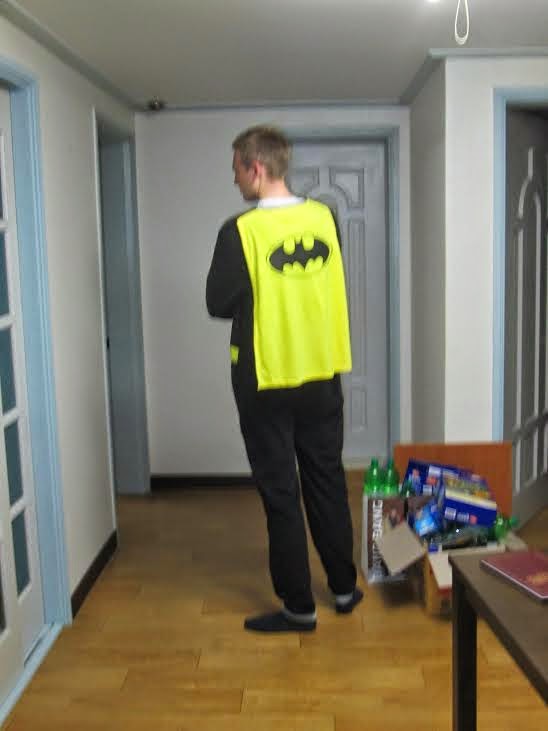 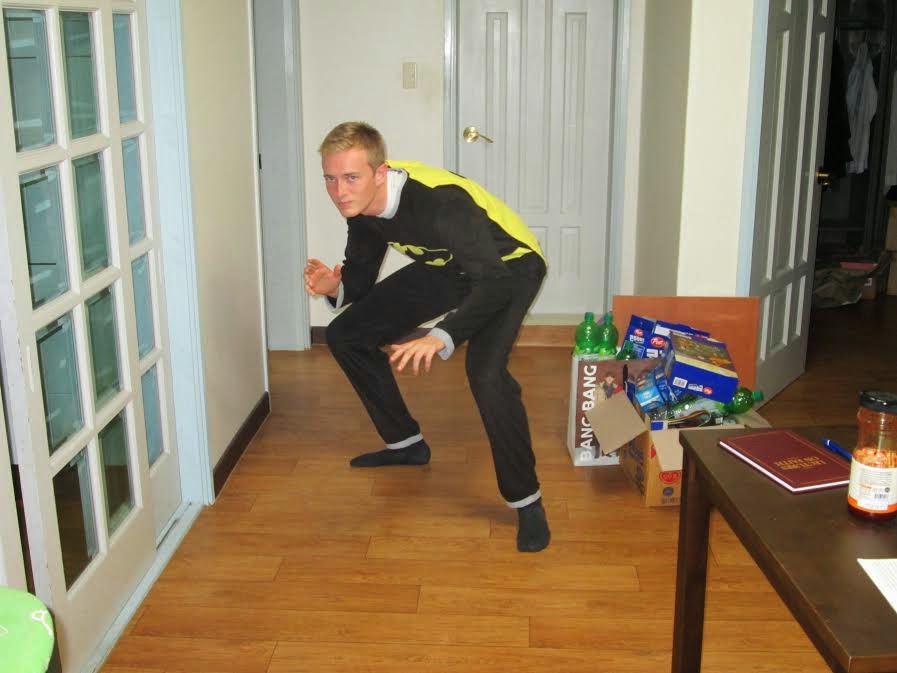 I was positively giddy with joy by the way. Loved it all!  I guess you guys know what I like. Poured through the books, especially our trip book, threw on the pjs first chance I got, am wearing the Point shirt right now, scarfed the no bakes...all of it was the best. Thanks so much for everything guys. I really loved everything.  Thanks so much!

And I love you too. Best of weeks.

...Usually when I think about the Book of Mormon, I think about how I can put on the armor of God and everything that that means. Insights I like from that symbol: Faith, like a shield is cool to wear, but is useful when you use it. It takes action to apply faith. Also, charity is the clothing underneath the armor. You can do everything that the Book of Mormon tells you to do without faith and go through the motions, and that's good, but armor chaffes without clothes under it right? That's where charity comes in. It makes it a pleasure to wear the armor.


We had two baptisms set up for this week, but neither of them were the Chinese investigators. ...they are on track for the 13th, though that's looking interesting now because they want us to go into Seoul on that day as well.

Of those two baptisms both were canceled. [#1] went on a trip with his friends ...so we reset his two week countdown. [#2] is only 13 years old and her mom revoked permission the night before the baptism. So Sunday roles around and the Sisters let us know that it is back on, so we throw everything together and get it done...and then the sisters let me know that they didn't ask for the mom's permission again. So....

Anyway, stuff is happening. Hopefully [#1] gets baptized this weekend, and the Chinese investigators the week after that.

We met with the family who is moving to Utah again this week to review the lessons and it hit me that, wait a minute, my family lives in Utah too. Can I give them your phone number and let you guys go meet them? Interesting, fun family. Plus they like me, so they can further inflate your view of me, which I like.

Just make sure that slip and slide's aren't a part of the [youth conference] curiculum and you'll do fine.

...Usually when I think about the Book of Mormon, I think about how I can put on the armor of God and everything that that means. Insights I like from that symbol: Faith, like a shield is cool to wear, but is useful when you use it. It takes action to apply faith. Also, charity is the clothing underneath the armor. You can do everything that the Book of Mormon tells you to do without faith and go through the motions, and that's good, but armor chaffes without clothes under it right? That's where charity comes in. It makes it a pleasure to wear the armor.