I've got obedience nailed to the wall. I act without knowing on things that I hope are true... Just keep going out and doing my part and waiting for something to save me.
This week was better though. Not good. Better. There are two ways I feel like I've improved on my mission. One is humility. The other is endurance. I can keep enduring.
Love you so much... Hope you enjoyed Korra for me.
Elder Whitlock
at 9:03 PM

(Referring to Exodus 17:9–13 )  ...That's the tough part, really. Holding up your arms when you can't feel any other hands there. And then another missionary comes along and jumps on and you've got to hold him up. Then another. And you start to get tired, but there's no relief in sight. Your arms are shaking, but you're only 7 months out.

I'm doing about as good as that might sound. I used to think that President Scoresby’s thing about Korean missions being a sort of like being a prisoner of war was overdramatic, but I feel that way sometimes. Trapped between a rock and a hard place and tallying days til I can get out. I'm about guaranteed another transfer at least and I might be around for a while yet.

Uncle Joseph wrote me an email one time and he also encouraged me to check out section 76. Pretty genius stuff, for sure. The bummer in the situation is that I'm not one of those people to whom it is given to see and understand (D&C 76: 116-117). Or do much of anything really. I hear about spiritual gifts and revelations and all of that stuff, but it doesn't happen to me. Even the things in my patriarchal blessing that were promised me aren't mine. I'm just a massive ball of "lack".

This week has been a harder one. I usually give happy banter because I'm genuinely happy, but this week was hard. Things will be better next week.

Still working on the couple from China. We taught them about exaltation this week and the man told me that they want to be baptized, they are just deciding when. He said something to the effect of them waiting for good news, which we interpret as they are having a baby or something and are waiting on some kind of results to make their decision. If you want to shoot me your contacts email or his name or something, then that would be cool. I'll let them know about him.

Thank you so much, as always, for the support and love. I love you, too.
Elder Whitlock
at 8:55 PM

The Briefest of Weeks

Last P-day was probably the best of my mission. We went to the temple, then to Outback, then to a sick museum.

Outback was great, as usual. Didn't end up going for the Chocolate Thunder from Down Under for time reasons, so me and my companion (transfer calls came and went, and we are staying) will be returning for one later. I ordered a cheese fries right off the bat, but there was a communication problem with the waiter (poor guy did his best) and so the manager ended up giving them to us for free after we asked about the lack thereof. Epic. We had some trouble finishing them, so we started playing a... game where when you lose you take a fry, then remembered that we still had our tags on and just attacked. We came. We ate. We conquered. 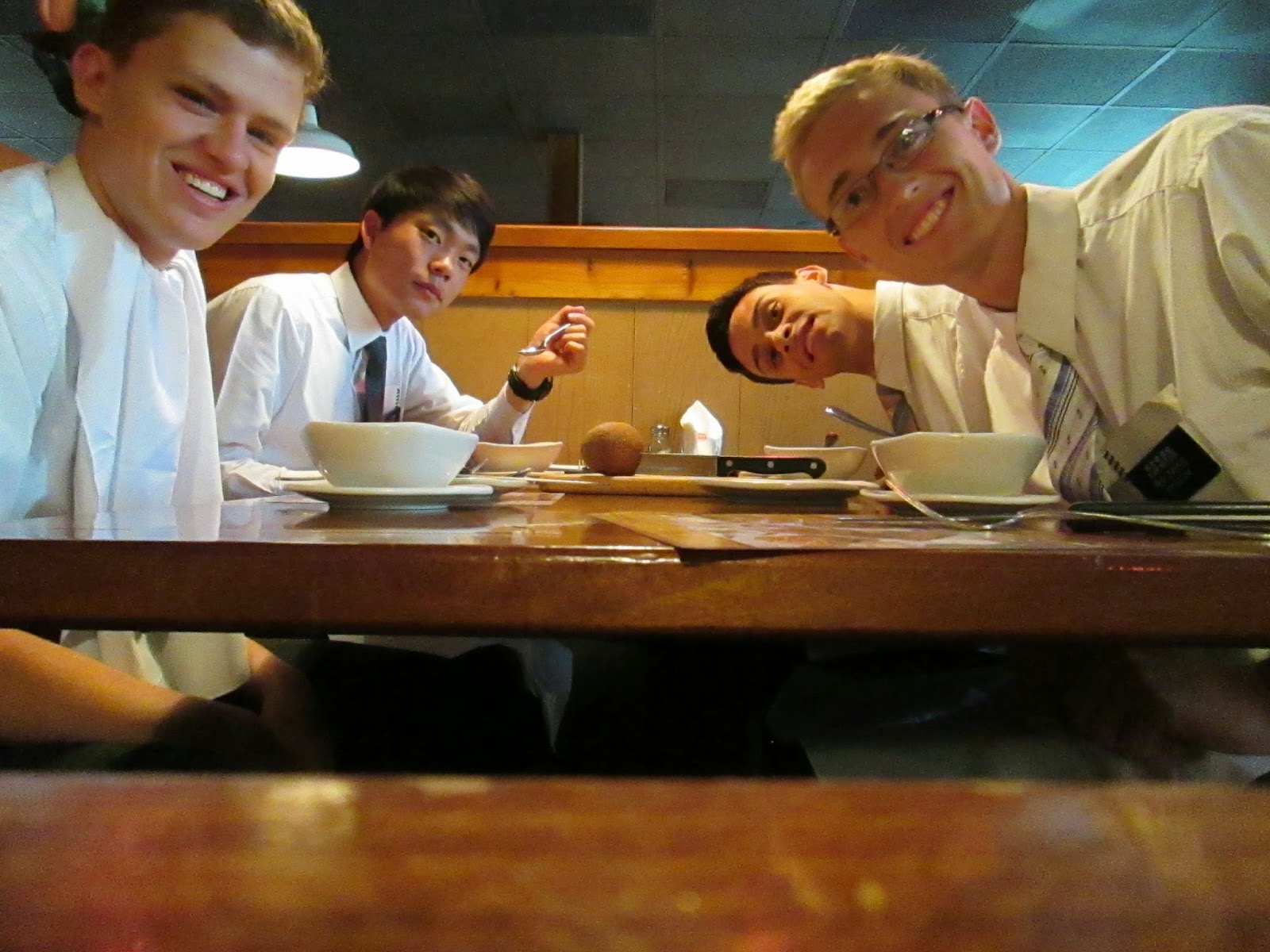 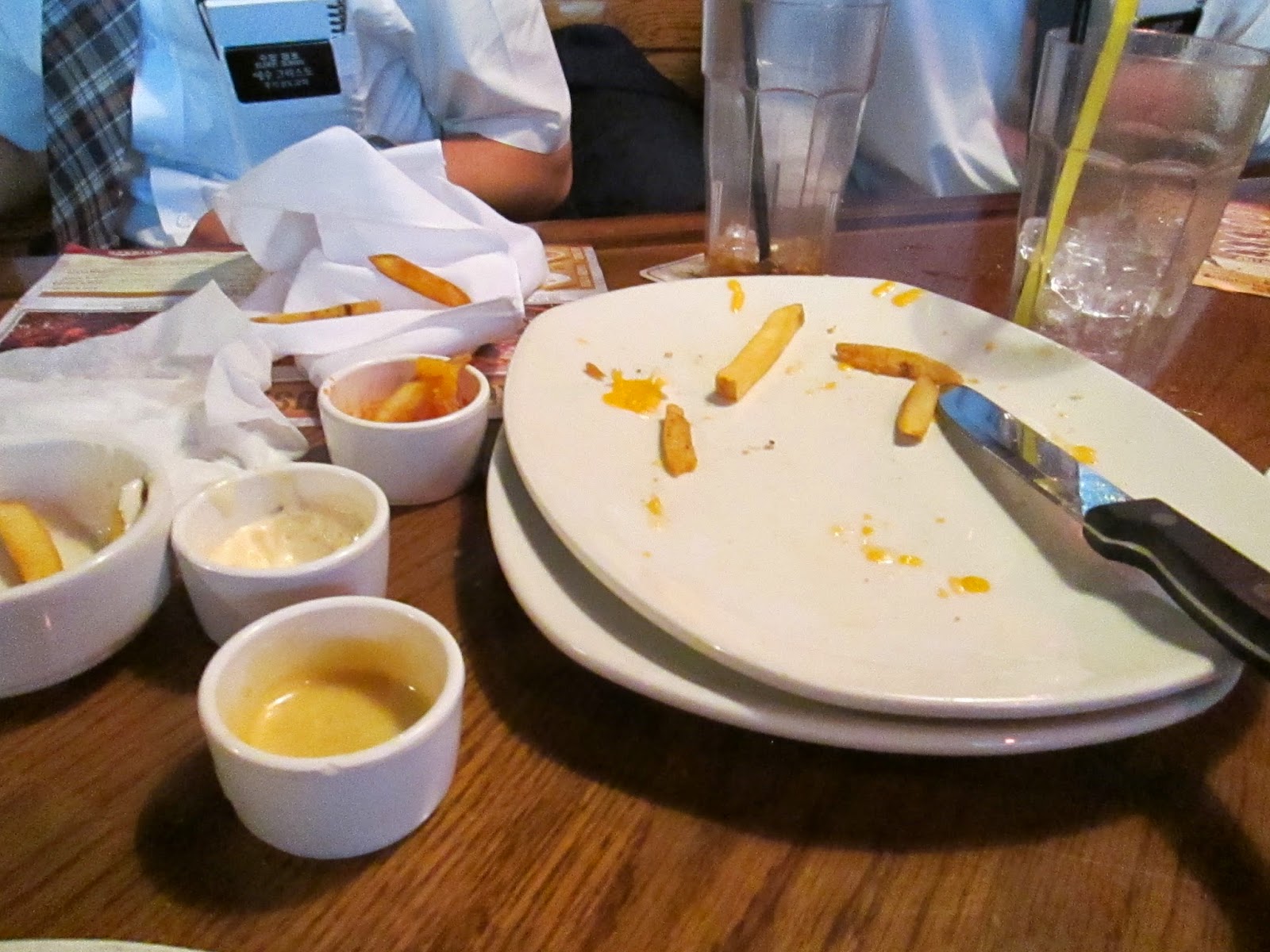 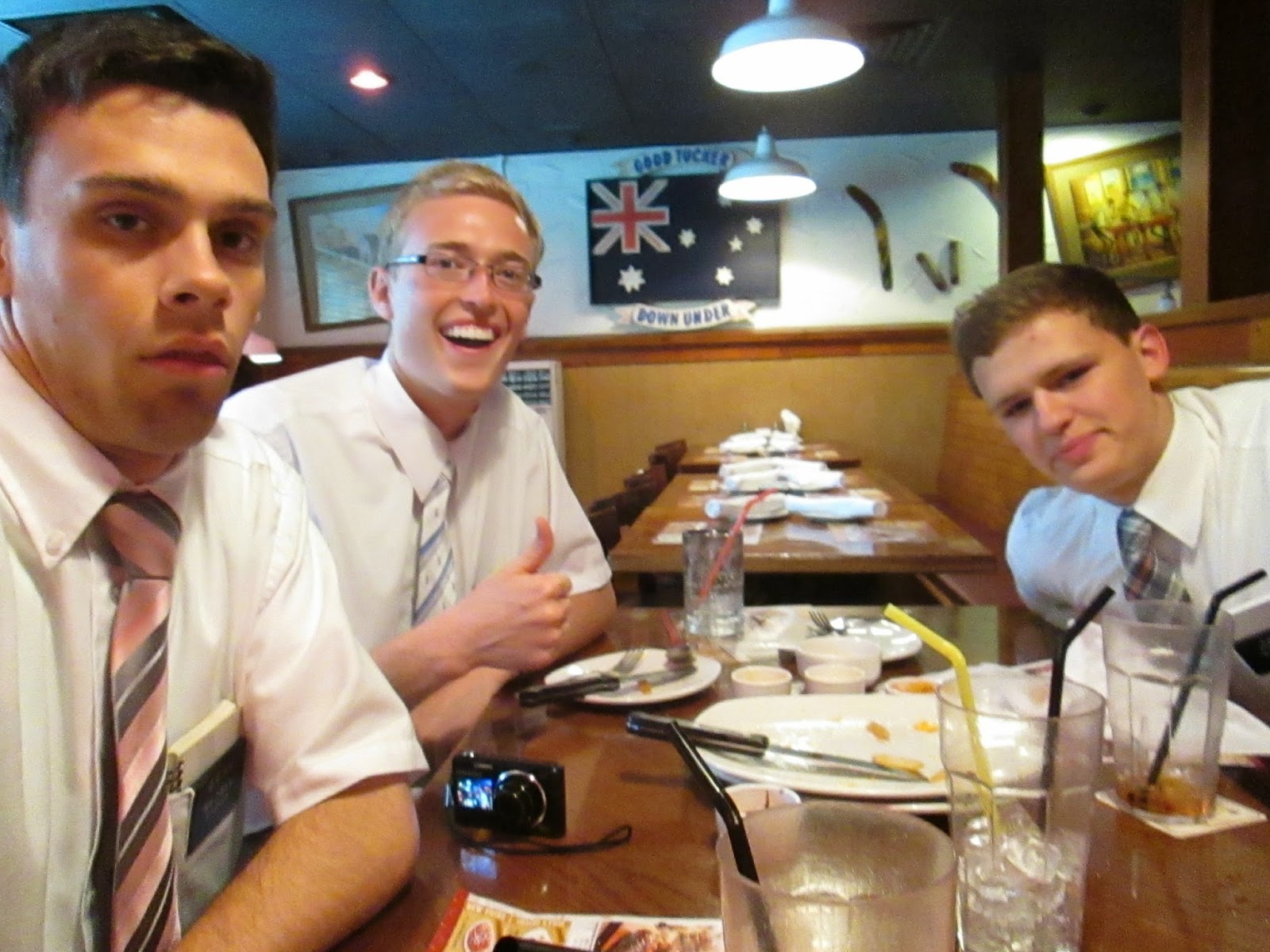 The museum was also sweet. It is underneath Gwanghwamun (Korean Time Square) and is a combo deal for the two most famous and loved Korean Heroes. King Saejong and Lee Seongsin. King Saejong was cool and stuff. He invented the Korean alphabet and reigned during a the golden age of Korea, sponsoring advancements in science, music, and art and establishing 7 garrisons that made the country more secure. He was fine, but Lee Seongsin is the MAN! 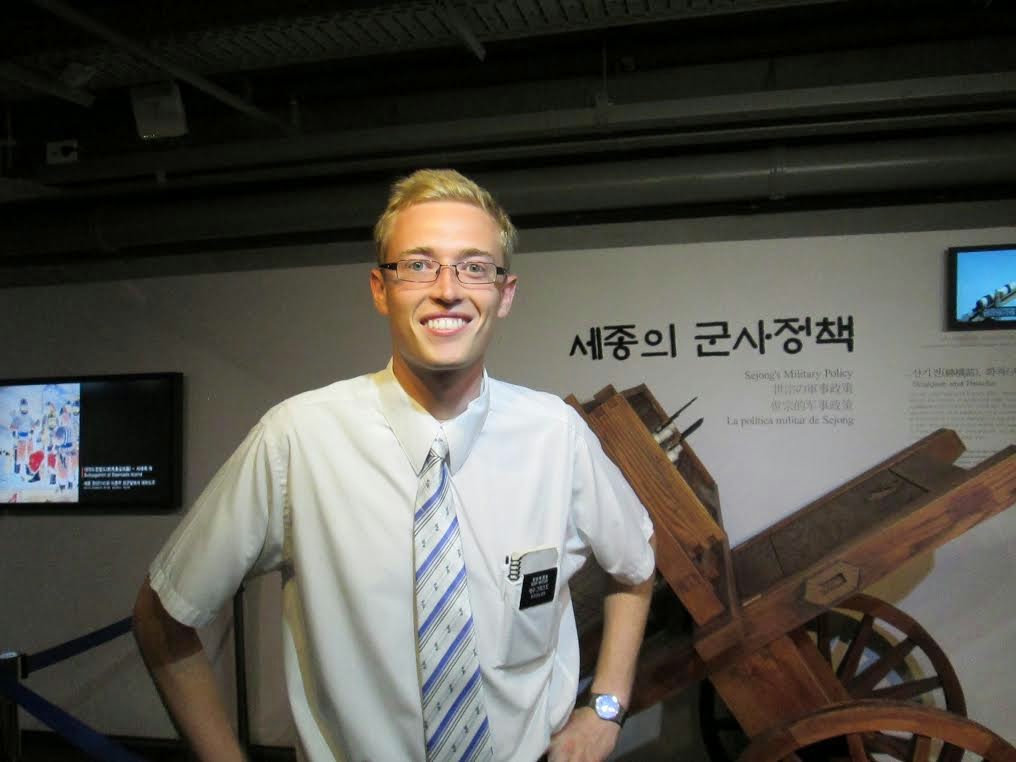 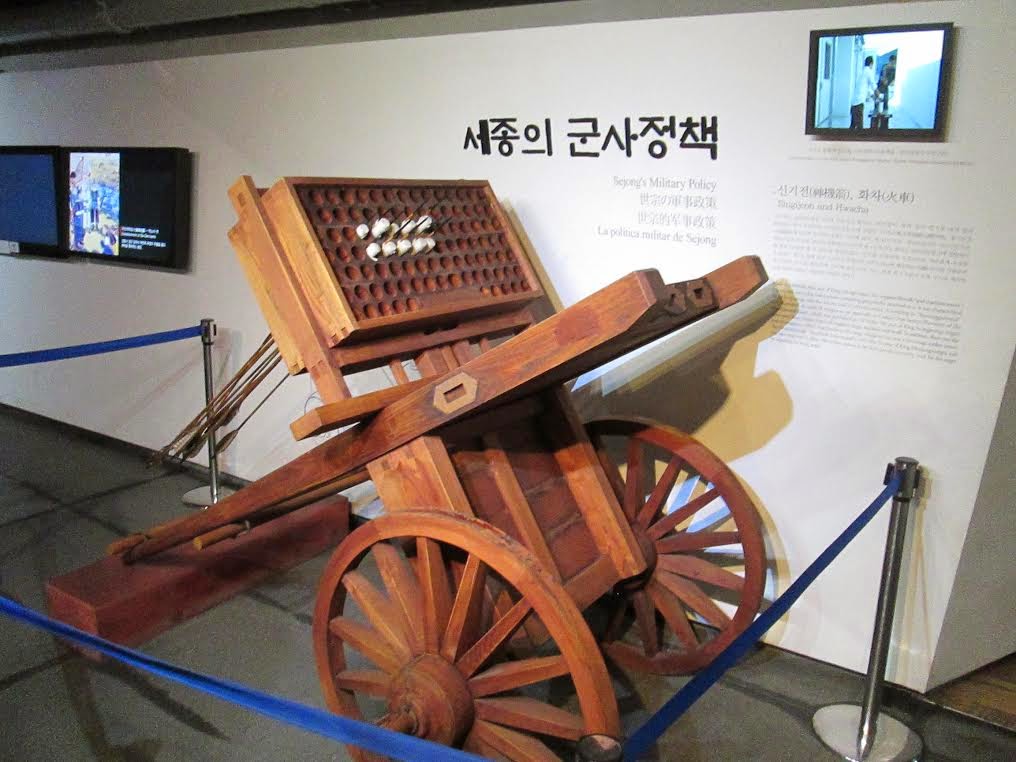 His part of the museum was all about himself and Korean naval warfare. They were pretty into artillery and were really innovative. The coolest inventions were something called a turtle ship (look it up) and this rig that lauched a whole bunch of arrows via rockets. Mega cool. Captain Lee himself was also sweet. He never lost a battle and saved the country multiple times. He innovated, wrote, went to prison on false charges, wielded a massive sword and was generally a boss. Look him up.

Also, I got that camel you sent. His name is Arphaxad. Thanks! 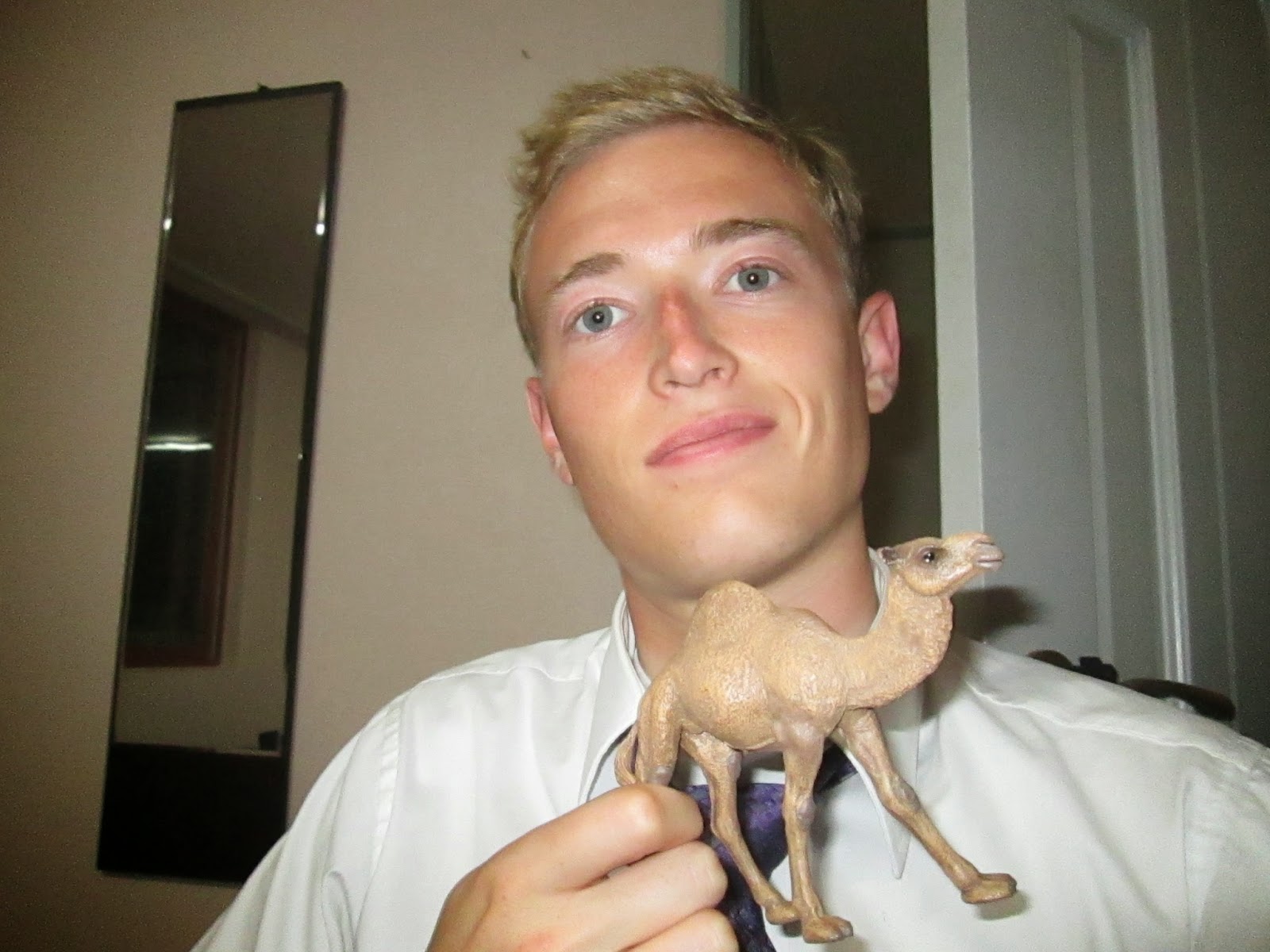 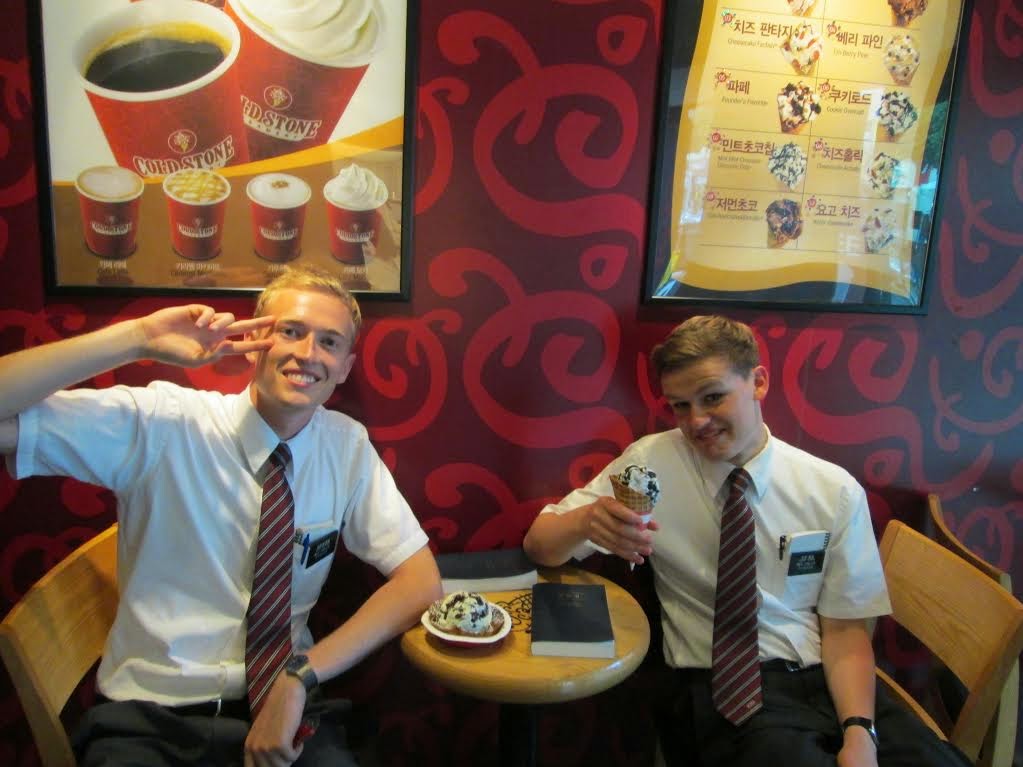 Can't imagine that tastes super good. At least not as good as the McDonalds/Coldstone combo meal that I got last Thursday. Elder S, my district leader, is from the same MTC generation as me, so we celebrated together right. On exchange. Our area is one of the biggest in the mission and covers several cities and villages, and, since we had no appointments, we decided to go scout one of them out. Currently, we are infamous in Chuncheon, so everybody knows who we are, most have been jundoed to by us, and no one is really interested in talking. Gapyeong was almost a breath of fresh air. All the people that we talked to were very nice and down to talk for a while. The only problem is that there weren't many of them. We did find this statue though. It's a monument garden to veterans from Ceder City, Utah of all places. Elder S used to live there. 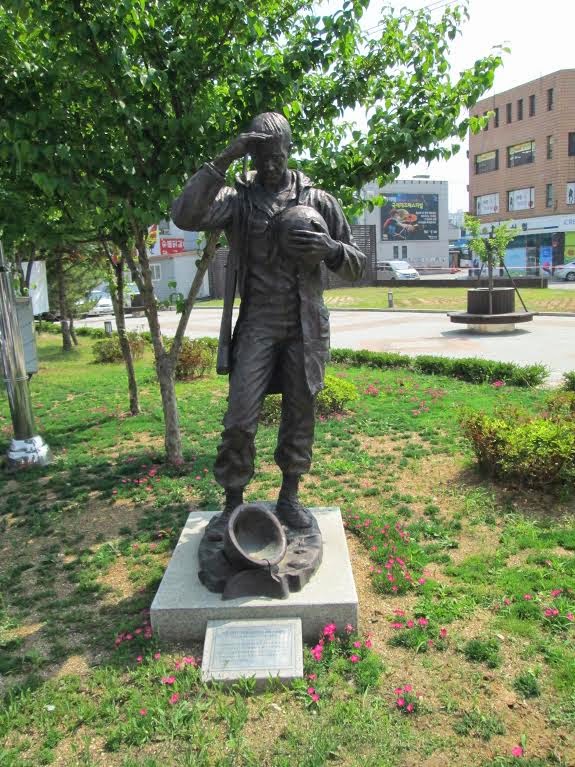 Anyway, without people we came back to Chuncheon and grabbed the above mentioned dinner and did some regular stuff til the end of the day. 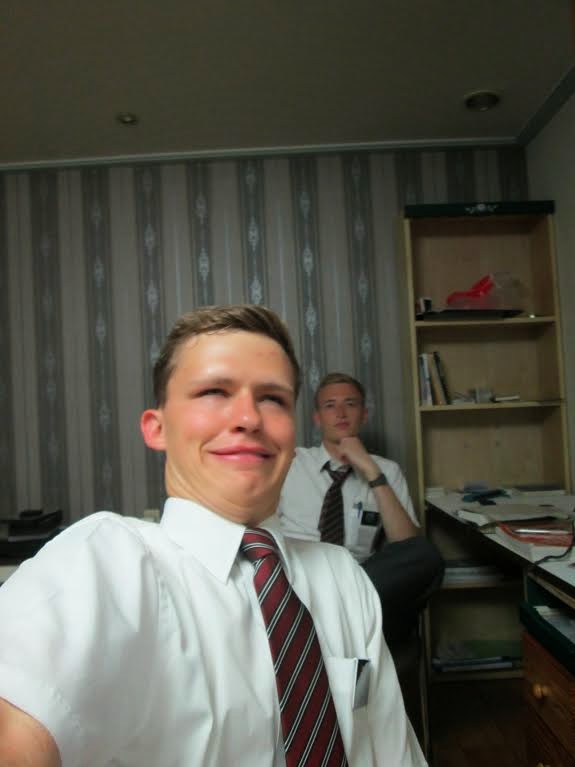 This week Elder Quentin L. Cook came to town, so Seoul and Seoul South missions had a combined conference. He talked about inviting being success and how we should treat new missionaries like real missionaries and about being warm and friendly with everybody.

We stayed the night in Gireum house again. Elder V is the last one there from when I was there, and he's having a rough time. The feeling that I got from the visit is that everyone in the mission is struggling pretty hard, or at least most of my friends.

After Elder Cook, we got to visit with other missionaries for a bit. I saw a lot of usuals from the Seoul Mission + Conner Brienholt (briefly) and Lauren Brocious (who went to AF with me and was in my companion's district, I guess). Super good to see everybody.

Anyway, back to the decreasing efficency thing. I've been thinking a lot about innovation this week. We are digging a hole here, with next to no results besides the increasing fury of the populace. I'm trying to find new finding methods that can supplement all the jundo that we can't escape.

Increase the controversy level of our jundos, so that people not only have but are more willing to share an opinion and invest in the conversation.

Combo Streetboarding and English Class. Ask a simple question "Does God exist?" in English at a University and let people vote, and give them English flyers while it happens.

Heck, I may even try soapboxing once Elder J is gone (he's less than down). Anything to try to change.

Any super great ideas pop up, let me know.