QUESTIONS: What kind of a Visa are the Chinese couple trying to get?  Do they want to stay in Korea permanently?  What is their educational background?

ANSWERS:
They are trying to stay on with ____ University as researchers. They only want to stay for another year or so. He has a PhD... from China's most prestigious university and she is writing her doctorate thesis paper..., after which she will graduate with a PhD.... They're both way smarter than me.

QUESTIONS:
Where do they stand on their baptism?  What is standing in their way?

ANSWERS:
They're going to get baptized, the only question is if they get baptized before they go back to China. If they can stay, they are planning on being baptized this month or next month. The fear with China is twofold. 1. They worry about being able to maintain the habits they have of living according to church standards in China.  2. They worry about the potential difficulty of finding a job (they both studied in tracks that lead into working for the government, because that's where the best jobs are, and you can’t have a govt job unless you are in the communist party... and you can't be in the party unless you are not religiously affiliated).

QUESTION:
How is your district doing?

ANSWER:
The district is not doing so hot. Things aren't horrible in most ways, but the sisters are having [some struggles].... and I can't really do much about it because they are sisters and I'm not a sister training leader, and they are hours away.

QUESTION:
How is your new companion?  I guess his brother was in T's mission.  Where is he from? I believe he has been out 6 months, which should mean he is still working hard to understand the language?

ANSWER:
That's right, his brother used to be the AP is what I heard. He's doing good! Any transfer requires adjustment and this is no exception, but he's doing alright so far. He's a hard worker, for which I'm thankful. His Korean is fine for where he is at, but that is a pretty early stage, so that's a little hard for him. His biggest problem is just that he beats himself up. He's got the skills and the drive he needs, just not the confidence. He'll get there.

Best of the Best

Chinese investigators are doing great. I'm confident he's going to be a big leader in China. Their faith is incredible. We are still waiting to find out if they can stay in Korea and get baptized or not. His wife also has the gift of prophecy. Transfer calls were this weekend (I'm staying, still the district leader working with someone I've never met named Elder B) and in the prayer she said something to the effect of "Heavenly Father, we know that Elder J will leave..." and sure enough later that night... in the same prayer she said that the best thing that happened to them since they got to Korea was to learn about the gospel.

So like I said. First an opening mission president in Shanghai, then an area 70 over China. 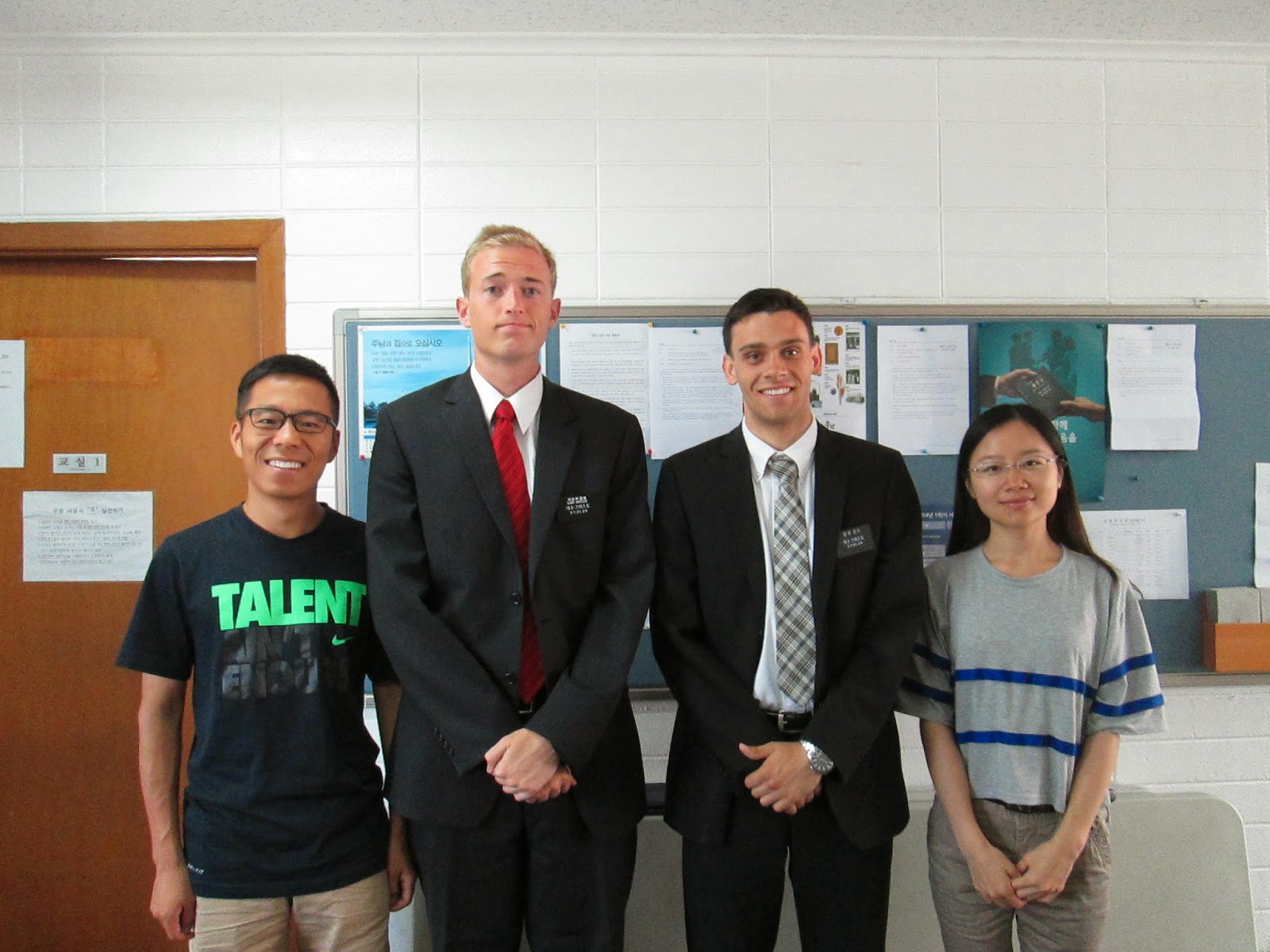 I do get to workout. I do a lot of strength oriented exercise because I still hate running.  I finally bought a weight a couple weeks ago and I'm already seeing improvement.  I'm usually sore.  Also, every night (when I'm not doing district leader stuff,...) we do an ab workout from Insanity or P90x.  I can handle Ab Ripper and Cardio Abs ok, but Insane Abs kicks my butt.


Summer gets pretty hot. We have air conditioning in our house, so that is nice, but outside I'm always sweating. It is humid, but we are getting close to the rainy season, so the humidity should go way up.
My opinion [about rain] has changed during my mission but lately I love it. If we must be wet, and it is hot enough that that is the case, then it may as well be water. The hottest part of the year is the next two months.

Love you too,
Elder Whitlock 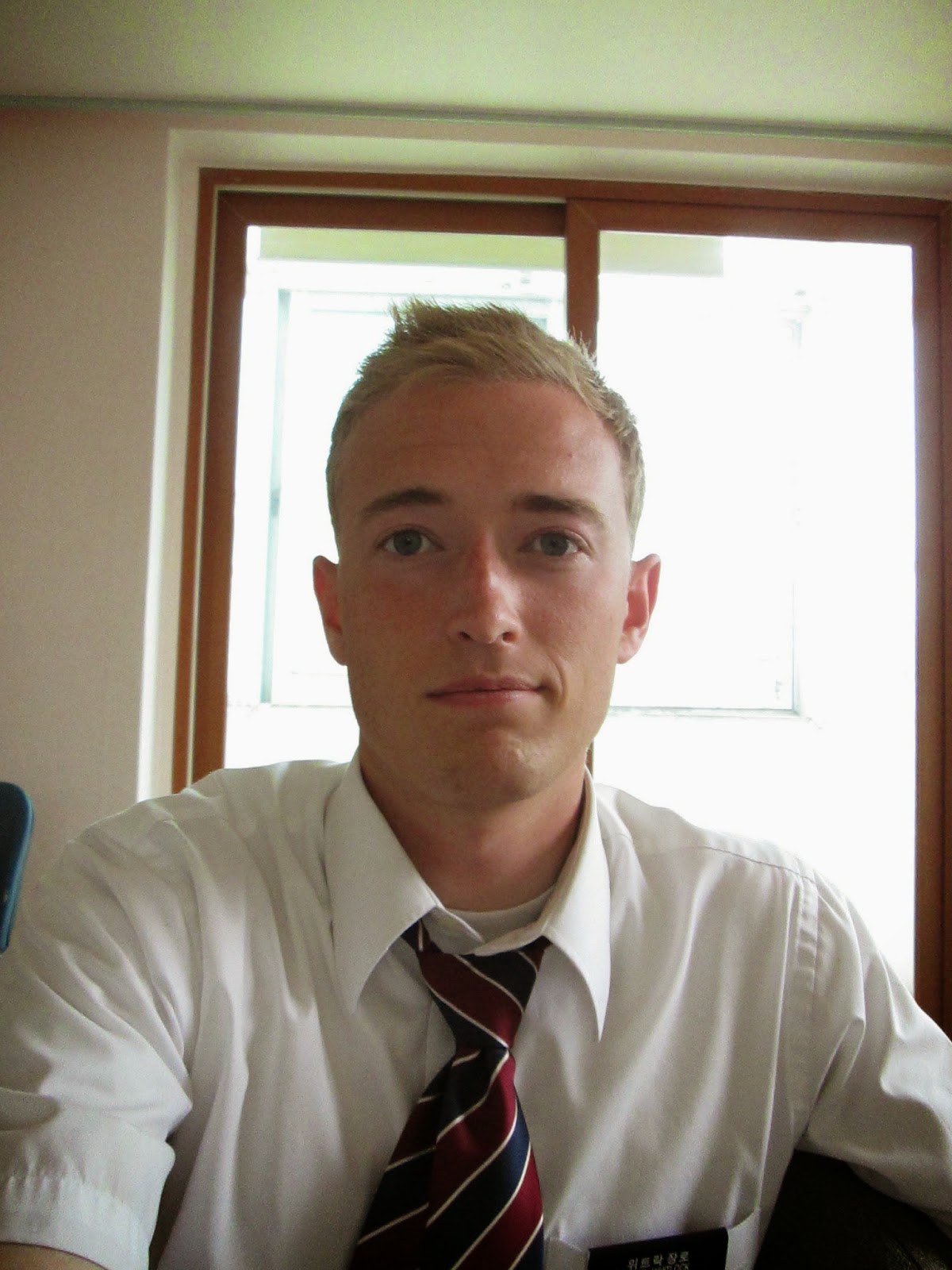 Last week was interesting. One of the guys in my district, Elder K had to leave for three days of military training (for those of you who don't know, all men in Korea have to serve in the military for two years and then they remain a part of the reserve for years after that, during which time they need to return for occasional training) so I was in a threesome for a while. Since we combined our appointments, we were pretty busy teaching, which was a nice change of pace.
I also went on exchange with Elder R, who is serving in my greenie area of Jungnang right now. He reminds me a lot of Hunter (who, holy Moses, only has what? Three months left?!). He taught me about the mechanics of _____ing goats and cows (farming? ranching?). I clearly didn't learn super well.
Highlights of this week: I got to translate for one of our Chinese investigators in fast and testimony meeting yesterday! He knocked it out of the park, actually got tears from some of the members. They'll get there.
Also, for the 4th of July, I will be symbolically representing America, in all of her benevolence. My country has given so much to the world that I decided to spot the district for Outback today. 'Murica! The fact that no one was willing to go unless I payed only factored into said decision in a mild way. We are going to bring Bang! along with us as well, and kind of see how the meal unfolds. Should be pretty sick.
Speaking of sick, we got back from fast Sunday jundo yesterday to break our fast and my companion pulled out his yo (Koreans sleep on fold out beds on the ground) and laid down. No other problems that day, but 20 minutes into meal time he requested a blessing. Just shaking under my hands. His lower back was killing, his hands started to go numb, and his legs were shaking uncontrollably. 김종복, our ward mission leader, and I took him to the ER in time for him to puke (like a champ) all over the floor. An x-ray, CT scan, and a urine sample later, it became clear that he had a kidney stone. I heard they were bad, but President made it sound like one of the worst things that can happen to a human being. I've decided that this is sufficient experience with the things, and that I'm going to drink more water. He's doing fine now. The doctors are having him take some pills for 10 days and then if he hasn't passed it they'll talk about other options, but it looks like everything is fine.
The coolest thing about it all was how little it cost. The whole experience, drugs, specialist fees, tests and all, was less than 400$ without insurance or government subsidization. 0.0
Happy Summer everybody!
Elder Whitlock
at 9:06 PM